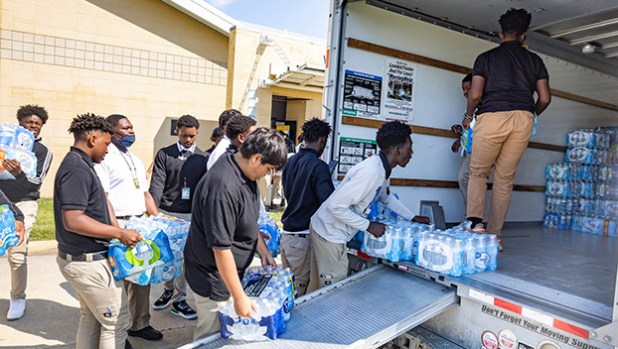 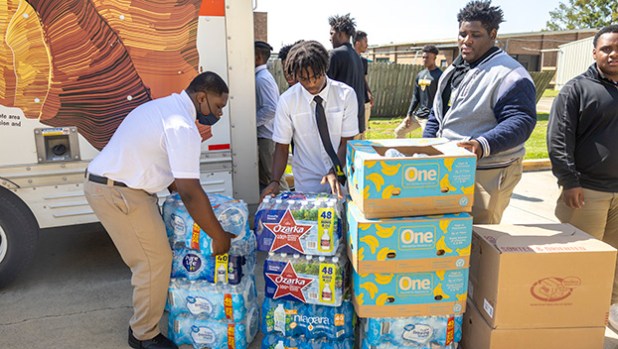 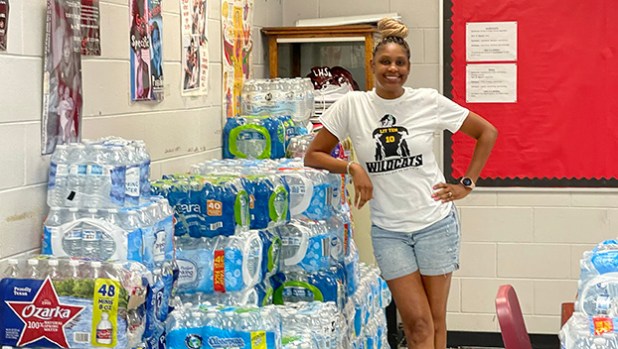 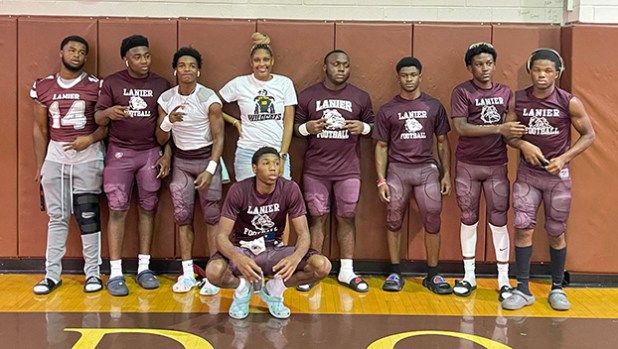 East St. John alum Ranata Coxie, the parent who came up with the idea to organize a water drive, stands among starters of the Lanier High School football team after bringing donations to Jackson, Mississippi.

RESERVE — When the East St. John football team traveled to Jackson, Mississippi last Friday to face Lanier High School, they brought along a U-Haul truck filled with pallets of bottled water to help a community in need.

Ranata Coxie, a football parent and class of 1998 alumna, first thought of hosting a water drive during a conversation with a family member about upcoming away games. The idea was fully executed less than one week later with overwhelming support from the Wildcat family.

Jackson, Mississippi made national headlines this month for an ongoing water crisis that has left residents without clean water to drink, bathe or flush toilets for the past two weeks. Widespread boil water advisories remain in place, and some residents are continuing to see brown water emerge from their faucets.

Students at Lanier High School have not had access to water on campus and have been asked to bring water from home. Despite being opponents on the field, members of the Lanier and East St. John football teams came together for a greater cause last week as countless water bottles were unloaded from the truck and stockpiled in a classroom.

Coxie said it was amazing how the effort came together in less than a week. As she traveled to Jackson with the team, she was reminded of the conditions St. John the Baptist Parish following Hurricane Ida in 2021. Something as simple as a bottle of water was a godsend in the absence of running water and electricity.

“We were in a predicament like this just last year. At any point in time, it could be us,” Coxie said.

Coxie’s idea to organize a water drive caught fire after she made a post on Facebook. East St. John teachers Keanna Theriot and Kristen White offered to become on-site collectors for bottled water donations at the school. Several East St. John alumni became involved, including Tremond Alvis, who donated the U-Haul truck along with a pallet of water.

According to Coxie, Pastor Neil Bernard of New Wine Christian Fellowship and St. John Parish President Jaclyn Hotard were more than happy to assist with the effort.

Many others contributed financially, prompting Coxie and her friends to make several trips to SAM’s Club to purchase water.

Since becoming athletic director in 2018, East St. John Coach Brandon Brown has encouraged his team to be involved in the community by instilling life lessons that are bigger than football.

“I had no idea it would take off the way it did. I’m really happy it went that way,” Brown said. “Just last year at this time, we were dealing with the same situation with Hurricane Ida, and we needed help and support. To be able to be a blessing to someone else is absolutely amazing.”