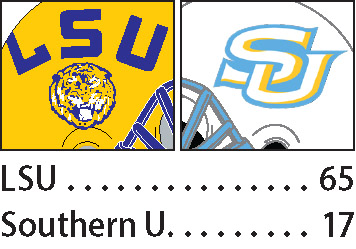 BATON ROUGE — If LSU knew it was going to be this much fun, the Tigers probably would not have procrastinated for 106 years before playing crosstown Southern University.

It certainly wasn’t unexpected but the Tigers did pretty much what they wanted and what they were supposed to do in coasting to a 65-17 victory over the Football Championship Subdivision Jaguars, which was also LSU’s first game against a Historically Black Colleges and Universities school.

“It was really about emphasizing playing with a sense of urgency, playing fast, free and physical and trusting their teaching,” Kelly said. “Trusting it, but not overthinking it. Letting these what I consider (to be) outstanding athletes go play, go play without being apprehensive and that was really the message our week.”

What it proved is tougher to judge in what turned out to be every bit the mismatch that was predicted before the Tigers put on the brakes early.

But that came only after the über-fast start Kelly was emphasizing.

LSU starters got the rest of the night off and just about every Tiger in uniform got to play, leading to some sloppy play while managing two second-half touchdowns.

Before having a seat early, quarterback Jayden Daniels completed 10 of 11 passes for 137 yards and three touchdowns. He also ran for a 18-yard touchdown, but behind a reshuffled offensive line, it was one of three runs for him as he was able to stay in pocket far more often than last week.

The Tigers ended with 550 yards, most of them in the first half, with Armani’s Goodwin’s 85 yards and two TDs on eight carries leading the way for 230 yards on the ground.

LSU fans even got to see the famed Southern Human Jukebox marching band, which was about the only reason to stick around past the first quarter. But it also allowed an early exit for most fans after the musical interlude to keep the postgame traffic from repeating the tangled pregame nightmare.

Kelly’s main goal was to get off to a quick start after the Tigers struggles in the Superdome last when they didn’t score a touchdown until late in the third quarter against Florida State.

But it will get a lot tougher next week when LSU opens Southeastern Conference play at home against Mississippi State.

Southern (1-1) got $700,000 for the crosstown trip along with a nice gift basket late in the third quarter when LSU backup quarterback Garrett Nussmeier served up an ill-advised underhand toss that that Benny Gray easily returned 94 yards for the Jaguars’ first score.

Southern’s first score was one of two interceptions Nussmeier threw that should never have left his hand. He finished 13 of 23 for 183 yards and the two picks.

But Southern, which added another touchdown and a field goal on the game’s final play against the bottom of the Tigers’ depth chart, gave far more than the Jags took.

The Jags eventually lost four fumbles, threw a pick six and had a punt blocked that turned into a safety.

LSU’s Micah Baskerville, who had apparently lost his starting job in August, got the game ball as he blocked the punt and returned the interception 29 yards for a score that put LSU up 28-0.

LSU star Kayshon Boutte also bounced back from a curious struggle last week. He took a seat early, too, but caught all five passes thrown to him for 42 yards and also picked up 41 yards on an end-around.