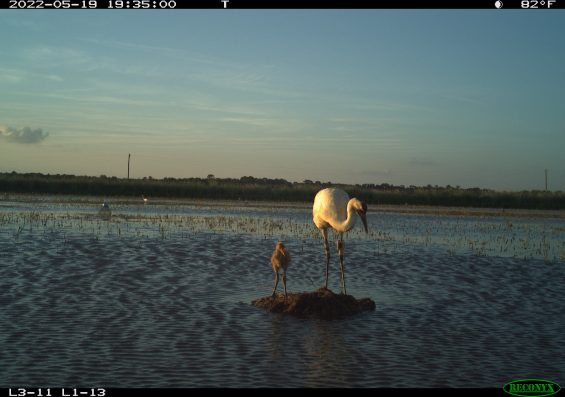 A whooping crane cares for its chick, hatched during the 2022 nesting season in Louisiana.

The 2022 breeding season was a big success for Louisiana’s experimental whooping crane project as eight wild hatched chicks have fledged and been added to the Louisiana population. The eight chicks are the most in a single breeding season since the project was initiated by the Louisiana Department of Wildlife and Fisheries (LDWF) in 2011.

A total of 15 whooping crane chicks hatched this year with eight surviving to fledge. It brings the Louisiana population to 76, 16 of which were wild hatched in the state. The first wild hatched Louisiana chick came in April of 2016, the first to hatch in the state in more than 75 years.

Louisiana’s whooping crane reintroduction project began in 2011 when 10 juvenile whooping cranes from the Patuxent Wildlife Research Center were released at the White Lake Wetlands Conservation Area in Vermilion Parish to initiate the non-migratory flock. This marked a significant conservation milestone with the first wild whooping cranes in Louisiana since 1950. Support of partners, including Chevron, the U.S. Fish and Wildlife Service, Audubon Nature Institute, Coypu Foundation, Entergy, Cameron LNG, SLEMCO, International Crane Foundation and the Louisiana Wildlife and Fisheries Foundation, have allowed LDWF to expand its effort in Louisiana.

“Eight chicks is the most we’ve ever had and it’s also the most that have ever fledged in a single year from any of the reintroduction projects nationwide,’’ said LDWF Biologist Sara Zimorski, who oversees the whooping crane project. “We can’t point out exactly why this was our best year. It could be partly the age and experience of the birds. We certainly have birds that have gained experience hatching and raising chicks over the previous few years, but we did also have some new pairs who were successful for the first time this year.”

Zimorski said dry conditions during the breeding season, which runs from February until June, may have also been a determining factor.

“I don’t think we’ve had a nesting season during a drought like we had this year,’’ Zimorski said. “Intuitively it doesn’t seem like that would be good, but according to some colleagues from the U.S. Fish and Wildlife Service,  other species of water birds often have really good breeding success in drought years that follow wet years, which we definitely had last year. It’ll be interesting to see how the weather patterns correlate with breeding success going forward.’’

Whooping cranes are slow to mature and only lay one to two eggs during a nesting attempt, typically raising only a single chick even if both eggs hatch. So reproduction can be a slow process. The cranes normally don’t reach sexual maturity until they are 3-5 years old and the captive reared cranes, when introduced into Louisiana, have been less than 1 year-old. Louisiana cranes have had some success at young ages with several of this year’s successful parents being 5 years old. Additionally this year, for the second year in a row, and for the third time since chicks first hatched in 2016, a pair was successful in fledging twins.

Anyone encountering a whooping crane is advised to observe the bird from a distance and to report the sighting to LDWF at: https://www.wlf.louisiana.gov/page/report-a-whooping-crane-sighting-or-violation . Whooping cranes are large-bodied, white birds with a red head and black facial markings. Birds measure a height of five feet and have a wingspan of seven to eight feet that makes them very distinctive. In flight, whooping cranes display black wing tips and a fully extended neck, and legs, which extend well beyond the tail.

For photos and video on the whooping crane nesting season, go to https://ldwf.canto.com/v/2022WhoopingCranes/allfiles?viewIndex=0.