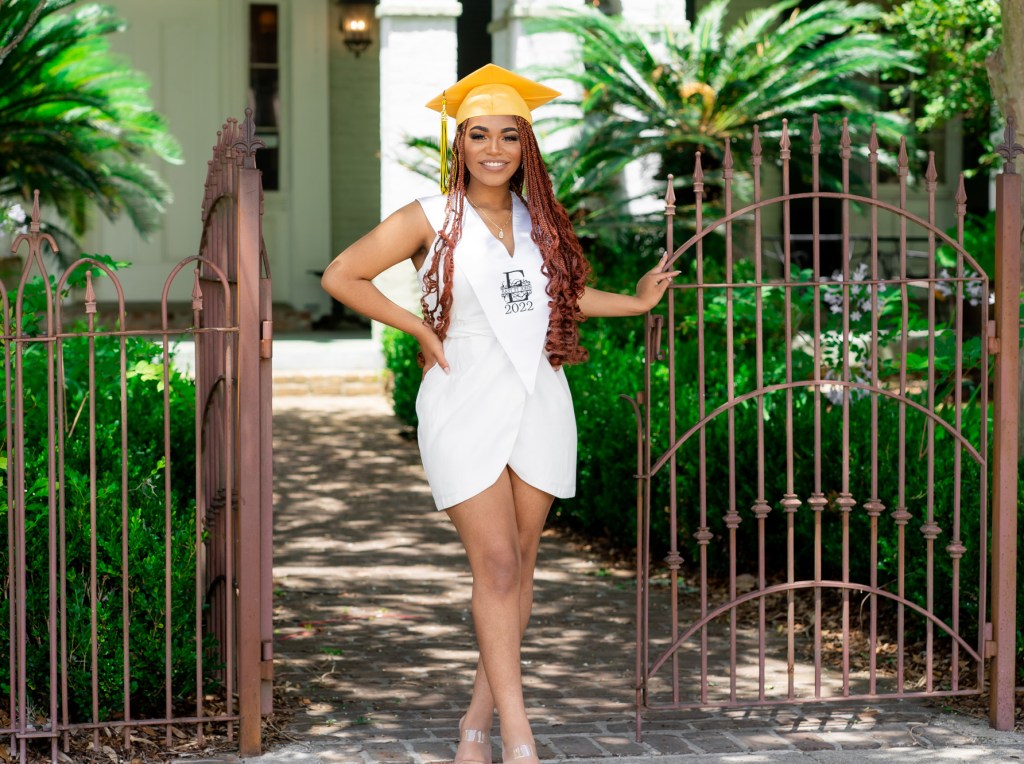 Angel Williams is a 2022 East St. John graduate who has triumphed over adversity.

RESERVE — Faced with unimaginable tragedy, East St. John Class of 2022 graduate Angel Williams showed the world that anything is possible when she became the first in her family to complete high school and attend college.

Williams was a survivor in the fatal 2019 crash that claimed the life of her godmother Toneka Terry, a local teacher who had a major role in her upbringing. Losing her second mother impacted every aspect of Williams’ life, including her ability to focus on her education.

It was difficult for Williams to carry a full conversation without zoning out. Sometimes it felt like her mind was forcing her to forget what had happened by leaving holes in her memory. She was in class when everything from the accident came flooding back all at once, causing her to run out of the room to try to escape from the thoughts that tormented her.

“I didn’t notice the events changed me until it got really, really bad. I was reacting to things differently than I would have before. My sister would be at the school every other week because I was in trouble, and it made it harder for me to graduate,” Williams said.

For the most part, Williams tried to cope with the loss on her own. As the world threw more challenges her way during her high school years, including a global pandemic, virtual learning, and having her home destroyed by Hurricane Ida, Williams learned to lean on the support of those around her.

“My sister Ambrea helped me come a long way. I used to bottle everything up. Sometimes she would take me in a room where it was just me and her and tell me to let it out, and I would just scream. Just her bring there helped a lot, knowing I had somebody by my side,” Williams said.

As a middle school teacher, Walker encounters a lot of kids who have lost a parent figure or have a parent who is absent from their lives. She believes Williams’ story of triumph can inspire children in similar situations, proving loss doesn’t have to be the end of their story. It might just be the beginning.

While Williams often doubts herself, Walker wants her to know that she has accomplished everything expected of her and more.

“I’m proud of her resilience and how she really beat the odds. She didn’t become a statistic when it would have been very easy for that to happen given her upbringing and her childhood. I’m proud of her for excelling through that, through COVID and online schooling, and through Hurricane Ida during her senior year,” Walker said. “Within the last couple of months of her senior year, I had to stay on her and make sure she did something because she was behind in class. She never gave up, and at the end she realized she could do it. Now she’s really enjoying being in college, and that’s probably something that she never thought she would be able to do.”

Williams will never forget seeing her biological mother, Berrilyn Williams, cry tears of joy as she became the first in their family to walk across the stage and obtain her high school diploma.

Williams is now a freshman at Southeastern Louisiana University studying medical chemistry with plans of becoming a pharmacist. She’s always had a knack for science, but she loves writing just as much.

“I was going to major in literature, but I feel like I don’t need to major in that to be able to write books. The first book I will write will be telling my story,” Williams said. “I want people to know my story and know that nothing is impossible, no matter the obstacles or who wants to stand in your way. I want to be living proof that anything you want, you can get.”

While chasing her dreams, Williams is encouraging others in her family to do the same. She’s currently helping one of her older sisters complete high school courses.

“I help her with her work to show her I don’t have to be the only one. Our family is bigger than that,” Williams said.