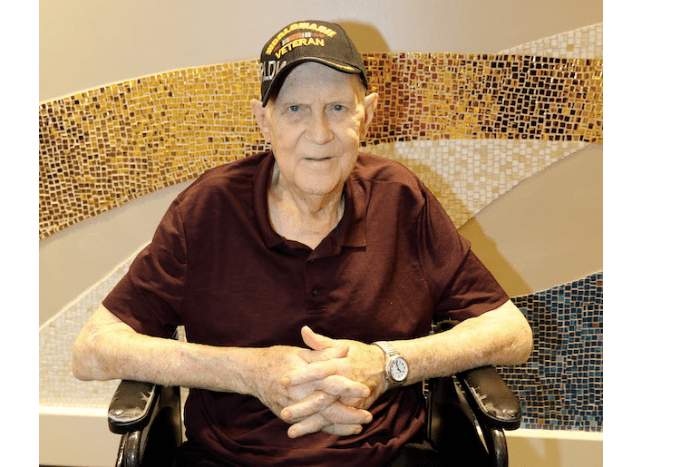 “I’ve been a very lucky fellow,” LeBlanc said. “I’ve done everything in life that I wanted to do. I’ve been to every place I wanted to go. I guess I have had a blessed life.”

Today, at the age of 93 the World War II Army veteran makes his home at the Southwest Louisiana Veterans Home in Jennings where he reminisces about those days on the road.

As a guitar player, the Lafayette native toured and played on the Grand Ole Opry with big-name acts including Ernest Tubb, Bill Monroe and Eddy Arnold. He also toured with Hank Williams during his southern tour, three years before his death.

“I was on the road for years playing in country bands,” LeBlanc said. “I traveled to just about every state in the union. I missed a few, but not many. I enjoyed the scenery and the people. People everywhere you go they treat you very, very nice. They’ll invite you into their homes to eat and sleep if you don’t have a place to stay.”

“I miss those days,” he continued. “I miss being there. It was exciting. You never knew what was coming up or where you were going.”

LeBlanc began dabbling in music at the age of 12 playing the guitar and drums with a cymbal on it. He’d often play with a French accordion player’s band in Breaux Bridge before joining with a country band called Happy Fats in south Louisiana. The band had a one-hour show every Sunday in Lafayette

He’d play in the band, emcee the shows, set up the sound system and drive the bus.

“Country music was my favorite because I could play it better,” LeBlanc said. “I don’t understand French, but I know the melodies. And I played rhythm guitar and bass. There’s very little room in a French band for an electric guitar, but with the country (music) I could take my rides on my guitar and I’d shine a little bit.”

His country musical career took off shortly after he returned home from World War II.

“When I got back to Lafayette the girl I was going to marry had already been married, so I moved to Clarksville, Tenn., where I played with a band up there,” he said. “We did an audition to be on the Grand Ole Opry. The fellow came out of the control room and he tells the guy that runs the band that he had a good band and he sang well, but asked him if he had to take the whole band or could he pick the ones he wanted.”

He chose LeBlanc and Cousin Jody, the dobro player who was part of the long-running Grand Ole Opry comedy team of Lonzo and Oscar.

“So we joined the Grand Ole Opry and joined a team called the Millers’ Brothers Band,” LeBlanc said. “That was a band where if stars like Ernest Tubb or Eddy Arnold needed a player in their band while touring, they’d take from that band. It was there for them so they didn’t have to go looking for anybody else to play.”

He recalls band members often traveled around the country following the stars in Packards with matching teardrop trailers loaded with stage and sound equipment.

Members of the band were required to know the music and material and be ready to perform at any time, he said.

“We knew how to act on stage, too,” he said. “On stage you took two steps behind the star. If you passed in front of the star, you’d be looking for a job. And if you were going to take a ride on your guitar you would only take one step, but you were always behind the star.”

LeBlanc played on the Grand Ole Opry for about a year.

As his family grew, LeBlanc decided it was time to spend more time at home with his wife and seven children. He took a job working in a bank and playing music when he could.

LeBlanc had various gigs over the years, including playing on the Louisiana Hayride and doing shows for former Governors Edwin Edwards and Jimmy Davis during their campaigns. He was also part of a comedy act known as Cousin Mack and Smilin’ Jack and had his own band called Smilin’ Jack LeBlanc and the Louisiana Ramblers, who Jimmy Newman played with a few times.