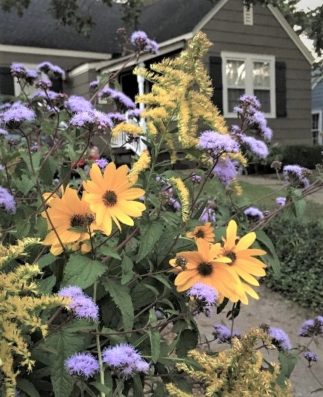 It was recently suggested that someone start an Invasive Plants Society, dedicated to growing garden-quality weeds. Its motto: “Be careful – this one’ll get away from you.”

Don’t know if it was tongue-in-cheek or a snarky swipe at we who enjoy plants for better or worse, including a few that have no problems coloring outside the lines. Including a few, both native and imported, that can problematic for neighbors, and in worst cases can have serious ecological issues if they escape into the wild.

First, the definitions, because one gardener’s most hated weed may be another’s cherished wildflower. Many gardeners define weeds as “plants out of place” which includes those that crop up where not deliberately planted as well as those that come into gardens on their own, uninvited. Could be said, then, that a weed is actually “any plant having to deal with an unhappy human.”

What about the native vs exotic thing? Native generally means only those already growing here before people started importing newbies from afar; exotic means brought here from afar. Some purists even disavow improved cultivars of true natives, which smacks to me like saying a Pomeranian isn’t a true dog.

Even “invasive” causes botanists to get their rhizomes in a knot. To them, a plant can only be called invasive if it isn’t native to a particular region. To this wordsmith, the term is easily-applicable for any plant that comes in and runs amuck in my garden space, including natives from nearby woods. Invasive is as invasive does. Whatever. Fact remains that while seven of my top ten flowering perennials are native to Mississippi, four of my five worst hard-to-control weeds are native plants as well (smilax comes to mind).

Still, there are well-meaning folks who want to ban the growing and sale of prolific self-spreading plants that aren’t from around here. Both horticulturists and gardeners who promote their use are often vilified as ignorant or uncaring about the larger world.

I’m not standing up for or minimizing the serious agricultural and ecological destruction caused by kudzu, cogon grass, water hyacinth, Chinese privit, callery pears, trifoliate orange, popcorn/tallow tree, torpedo grass, alligator weed, running bamboo, and few other non-natives. They spread and adapt quickly, often overwhelm everything around them, and are difficult if not impossible to eradicate.

But then there are those that are commonly planted but and do spread, sometimes creating ecological problems but still worth cultivating. I’m thinking mimosa, nandina, orange daylilies, liriope, chinaberry, English ivy, Mahonia, four o’clocks, mint, daffodils, queen Anne’s lace and others which, to be sure, are often seen, sometimes in disruptive concentrations, in the woods, fields, and bottomlands, but so far are not off the charts. So far.

That mean we should not be allowed to grow plants that can possibly run a little wild, or for them to be banned? I’m of different minds on this; I see both sides, and wish the zealous folks on both ends of this debate could find some sort of compromise. I don’t want to give up my crocosmia.

But I do wish someone would come up with a list of seriously weedy native plants that are as bad or worse than anything from overseas. I grow Virginia creeper, trumpet vine, palmetto, oak, goldenrod, and tree sumac, and more beautiful, pollinator-friendly natives, but boy can they get unruly! I just pull up the wayward ones.

So, here’s to those of us who cheerfully grow plants, regardless of their country of origin, that are worth the effort they require to keep in bounds. “Pssst! I’ll swap a nandina for a sumac!”