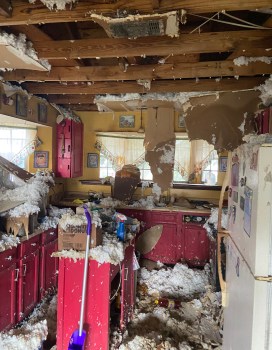 Vickie Poussard’s home is seen in the aftermath of Hurricane Ida. 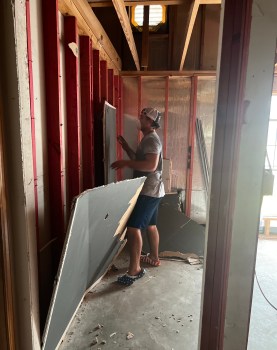 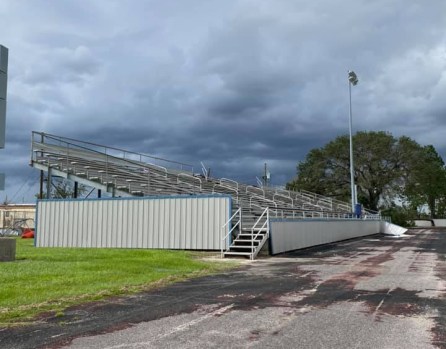 RESERVE — One year ago, Hurricane Ida barreled through the River Parishes of Louisiana, leaving a path of destruction in its wake. St. John the Baptist Parish was one of the hardest hit, with more than 80% of homes receiving some damage. Many members of the Riverside Academy community were affected. Some still are. A year later, many residents and businesses are still trying to recover. Riverside Academy received more than $3 million in damages. Not all of it is repaired yet. Here are some of our stories.

The damages done from Hurricane Ida to both the high school and middle school building as well as the stadium were severe. Many students and faculty helped clean up the school several days after Ida struck last year.

“We had the kids back but emotionally they were still having that struggle of not being in their home and living in trailers,” said RA Elementary Supervisor Kristin Roccaforte.

The high school building had damage done to some of the classrooms from water leakage as well. Many of the students’ artwork on the walls of classrooms had to be taken down off the walls and the teachers had to move out a lot of their belongings. Now all the classrooms and hallways from the pre-k, elementary, middle, and high school have been completely repainted and decorated for this year. Teachers have moved back into the building.

There still are some things to repair. The football stadium press box was completely destroyed and is still being rebuilt. The concession stand, which had been destroyed, is ready for the upcoming season. The baseball field is still missing its scoreboard and the fence is a mixture of colors.

The House Crumbled Around Her: by Jessie Weiler

It was 12:55 a.m. on August 29, 2021, when Hurricane Ida made landfall as a Category 4 hurricane with winds of 150 mph. As hurricane Ida wreaked havoc on Louisiana’s Gulf Coast, thousands were stuck inside their homes as they were destroyed.

My aunt, Vickie Poussard, was one of those people. As she was lying in bed with her two dogs, Poussard noticed that her roof had begun leaking. Just minutes after she put a bucket under the leak, her ceiling caved in on top of her and her dogs. Unhurt but stunned, she got her dogs and herself out from underneath the debris then went into the bathroom to wash the dirty, itchy debris off her. While she was in the shower, she heard another loud crash.

As she rushed out of the bathroom in a state of terror and panic, Poussard walked into her living room to discover that her dining room had caved in as well. As she was trying to salvage some of her memories from the wreckage, she turned around and watched in horror as her foyer caved in right in front of her eyes.

Poussard grabbed her dogs and ran into the last room she had left and rode out the rest of the storm until the next morning. She was trapped inside her house for the first day with no cell reception and no one to help her. Poussard said she felt alone and helpless at that moment.

“This was the most gut-wrenching experience I’ve ever had as I watched my home fall right in front of my eyes,” Poussard said.

Unknown to my aunt at the time, a text she had sent to her daughter went through before the cell towers went out. Rowan, who had evacuated out of state, got the text. She called her uncle to tell him what had happened and that her mother was trapped inside her house. With no way to get to her or contact her, her family felt completely helpless and terrified. It wasn’t until two days after the storm hit that Poussard’s brother, sister-in-law, and niece were able to go pick up her and her dogs from her destroyed home and bring her back to theirs in LaPlace.

Two days later, once the streets finally cleared of all water, Poussard and her niece were able to go pick up her car and start salvaging what she could of her and her daughter’s belongings.

Poussard sold her house and lived with relatives for six months after the storm and has moved into her new house with her two dogs and daughters in Bush, La. Looking back on it now one year later, Poussard said it was the scariest night of her life.

“I will never forget it, nor will I be staying for another storm,” she said.

I stayed! by Mason Meyer

It was August 29, 2021, and news of Hurricane Ida had just reached us. My mom and stepdad didn’t think we needed to leave because we’d ridden out plenty before Ida, so we didn’t think anything of it. Everything was fine and normal until the hurricane hit and the power went out, so I expected nothing different because this always happens. “Donda,” Kanye West’s new album, was also released that day, so I listened to it without thinking about the hurricane.

Later, I left my room to see my parents watching a squirrel hang on to our tree as the winds and rains picked up and got faster. It was funny watching it hang on. But as we watched, we saw something we never expected. The tree fell over, missing our house and shed, but knocking down and breaking our fence as an uprooted tree lay in our backyard. From the front window, I watched as pieces of our roof flew away.

We had no idea, but this was going to be the worst. The night went on as my mother screamed and water came out of our light switches, outlets, and lights, which worried us. We began packing our belongings as bubbles formed in the hallway ceiling. As we went to the laundry room, we heard an explosion as the bubbles that formed all popped, destroying our home.

The next morning, we had to leave our house because we had been working on it for months and it was almost finished, and we still remember how crazy this was. Many people said they wouldn’t do it again, but I’m different. If Kanye releases a new album, I’ll stay and ride it out again.

One of the hardest parts of adulting comes whenever there is a hurricane churning in the Gulf of Mexico and our town is in the “Cone of Uncertainty.” First, you and your spouse begin debating whether you should stay or leave. Then you start discussing options for where to go. Then you have the painful task of deciding what to take with you and what to leave. Hurricane Katrina taught us many lessons. All of my husband’s childhood photos were at his mother’s house in Waveland, Mississippi, which was completely destroyed by that storm and now lie somewhere in the bottom of Bay St. Louis. They had to live with us for a year and a week.

On the morning of August 29, 2021, Hurricane Ida was churning in the Gulf of Mexico and I was still wondering whether we should stay or leave. My husband answered the question for me with a simple, “We’re leaving.” A few hours later, we had pillows, blankets, important papers, a few cherished keepsakes, some valuables, a few changes of clothes and two small poodles packed in his van, ready to evacuate. But with pain in my heart, I looked over all the rest — my daughter’s childhood keepsakes, my own baby book, treasures my mother left me and her mother left to her, my wedding album. What do you take? What can you bear to lose? I think one of the hardest things I’ve ever done is lock my door and walk away from everything I own.

We headed north that morning with no place to go. Our plan was to get to Natchitoches, where my daughter attends college, and start looking for a place to stay. We lucked out on the way and got a reservation at the Motel 6. From there, we watched reports from back home and followed friends on social media. Some of the reports were pretty scary. I was stunned when I recognized our Spanish teacher, Mrs. Jackson, giving her terrifying account of the flooding in LaPlace on the Weather Channel. She was one of several teachers whose houses sustained extensive damage in the storm.

Junior Zoie Gray was one of many Riverside students who evacuated her home as well. She and her family headed west to Lake Charles, which was still recovering from hurricanes Laura and Delta. The Gray family spent several weeks with relatives in Lake Charles until it was safe to return to their home in Kenner.

We were lucky. Our house was spared. We lost a lot of shingles, a whole bunch of trees, and our pool was turned into a swamp for a while. We also were fortunate to have places to go while our area recovered. The Motel 6 was our home away from home for a week, then my sister ‘s in Baton Rouge, then my stepdaughter’s in Kenner. We finally were able to return home in September, the day after our power was restored.

Many others were not so lucky. They came home to homes that were destroyed.

A year later we still aren’t back to “normal.” There are families displaced, living in campers or with friends and relatives. Some houses still have blue tarps on their roofs. Some homes and businesses have not even been touched since the storm. It makes you wonder if they left and just didn’t come back.

My family is still trying to recover: by Noah Trepagnier

Before Hurricane Ida hit Louisiana, the pandemic had just started to calm down. We were getting back into school and COVID rules were being dropped and everything was becoming normal again. But then Mother Nature had other plans for us.

Hurricane Ida was a very traumatic and humbling situation for me and my family. We lost power and our back porch ceiling caved in. We were living off of Chef Boyardee and sandwiches for about three weeks. After the storm I helped around the Reserve area. I helped move a tree with a couple of people.

Over the past year, we have been struggling, living in a camper and ripping sheetrock out of our ruined house. Our house that we have been gutting was severely damaged by water. At first, we didn’t know about the water damage. We had a person from insurance use a water ray that could see if you had water damage. When he did that, we found out that the whole entire house was severely moldy. We recently took out the ceiling and the sheet rock was almost completely black. The corners of my kitchen ceiling were still wet and soggy.

Ida’s anniversary recently passed, and my family and I are currently still suffering from the damage Ida caused. We are looking for a contractor to help at least fix our house back to the way it was before. But contractors are charging almost 10 times as much as they used to. All of the materials are overpriced and too expensive for people to afford. My family and I are currently looking for a new contractor to help us get what we need for the right price and have them finish at the right time.