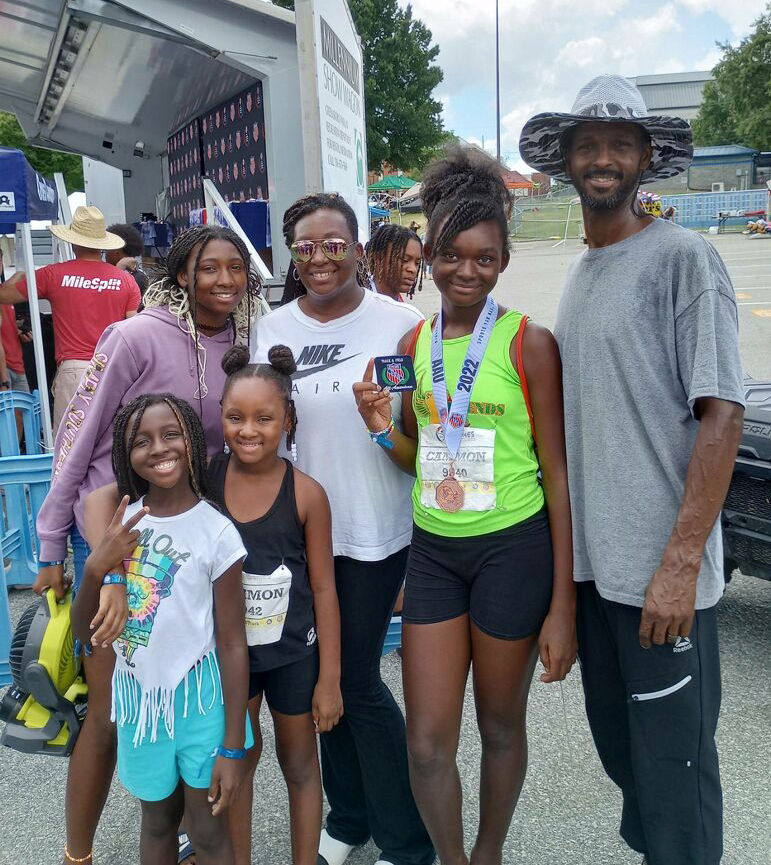 Chani Cammon, wearing green, stands with her parents Chad and Sherelle and her sisters Ciera, Cori and Camryn during a recent track meet.

LAPLACE — Twelve-year-old Chani Cammon was the only member of the St. John Legends Track Club to place in the top eight at all three national meets, including the recent Junior Olympics held in Greensboro, North Carolina.

Head coach Mark Creecy said Chani is a hard worker with a humble spirit and a bright future ahead of her. While she excels in numerous events, including the 200- and 100-meter hurdles, high jump and long jump, she earned her first All-American recognition for her triple jump performance during the Junior Olympics.

Going into the event, her personal best in triple jump was an admirable 30 feet, 7 inches. Chani excelled under pressure and completed her best jump to date with a distance of 32 feet, 7 inches, earning eighth in the country.

Her family had offered encouragement in the hotel room before the event. Chani was skeptical at first, pointing out that improving her distance by two feet to remain competitive with the front runners would not be an easy task.

She stopped doubting herself along the way. When her aunt called to ask if any of the girls had placed yet, her mother answered, “no,” and Chani corrected her by saying, “not yet.”

Chani remembers looking up into the stands to find her father, a former East St. John track athlete who coaches all four of his daughters. Her father provided guidance along the way, but in that moment, it was all up to her.

“It was exciting. I felt proud of myself because I jumped two feet farther than I did before,” Chani said.

In addition to triple jump, Chani also competed in the 200-meter hurdles and high jump at nationals. In high jump, her personal record currently stands at 4 feet, 8 inches.

Among the other 17 St. John Legends Track Club members to travel to North Carolina were Chani’s three sisters.

Their mother, Sherelle Cammon, is always proud to see her girls achieve their goals.

“It makes me proud just to see them blossom, to see their hard work and the progress. Those are our daughters. They put in the work, and you see the results,” she said. “When they are walking around with the medals, you see the glow on their faces. It was really a big deal for Chani to accomplish this and become No. 1 in our tri-parishes and Louisiana.”

Prior to the Junior Olympics, Chani placed fourth at the Area 11 Qualifiers in Hammond. She placed fifth in the triple jump in July during the Club Nationals in Orlando, Florida, and she was also successful at the Mark Trail Relays this past May in Atlanta, Georgia.

Chani’s father, Chad Cammon, said the entire family travels together to attend track meets, even when they take place out-of-state.
“I’m excited about the fact that Chani is eager to compete, even in things she is not familiar with,” Chad Cammon said. “Right now, she is on the volleyball team for the first time, and the coach says she is picking up things well and learning. The competitiveness is just in her. I’m excited to see how far she takes it.”

Chani excels not only in track, but also in the classroom. She recently started her seventh grade year at Lutcher High School, where she also hopes to compete in basketball this winter.