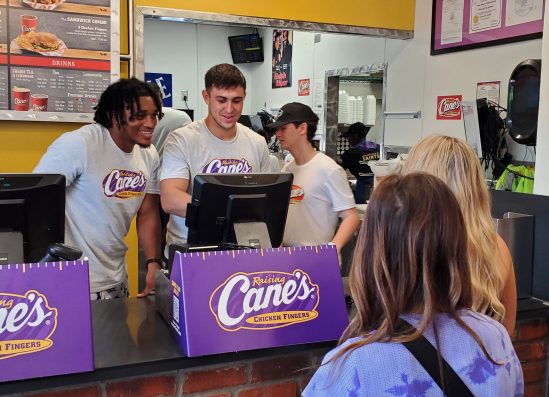 LSU wide receivers Jack Bech and Kayshon Boutte, running back John Emery Jr., defensive lineman Maason Smith, and defensive end BJ Ojulari swapped out their pads for headsets as they each took a turn manning the register and serving up chicken fingers and crinkle-cut fries. With Coach Kelly looking to have a great season, the five members of the four-time National Championship-winning football program were greeted by hundreds of fans eager to see the players.

On Saturday, players attended the official unveiling of Raising Canes’ newest billboard featuring the five Tigers players themselves – part of an NIL deal with the Louisiana-based company! The billboard is located above “The Mothership”, the original Raising Cane’s located at the North Gates of LSU, at 3313 Highland Road.

“I was so glad Todd invited us to pick up a shift this afternoon and surprise some Tiger fans,” said Ojulari. “Working the drive thru was harder than it looks!”

It’s become a winning tradition that “Caniacs” and players from their favorite teams enjoy Cane’s together! Past athletes sharing Cane’s and making memories with their fans have included Stetson Bennett of the Georgia Bulldogs, Jalen Ramsey of the Los Angeles Rams, Christian Braun of the Kansas Jayhawks and Olympic Gold Medalist Chloe Kim.

“No better way to kick off the season than with my teammates at Raising Cane’s,” said Emery Jr. “Great to spend some time working the drive thru today, and of course, eating the best chicken fingers in the world!”

Raising Cane’s is the nation’s fastest-growing chicken finger concept, rapidly approaching 700 restaurants in over 35 states and Guam as it opens 100 new Restaurants across 10 new markets in 2022.  The company has ONE LOVE® – craveable chicken finger meals – which includes the iconic “Cane’s Sauce” – named the #1 sauce in the quick-service industry. Raising Cane’s is consistently recognized for being a great place to work – most recently earning them a spot on Glassdoor’s ”Best Places to Work” list, and Forbes’ “America’s Best Large Employers” list. Raising Cane’s was also recently recognized in the inaugural Forbes Halo 100 for excellence in delivering customer satisfaction and brand trust. More information is available at raisingcanes.com.