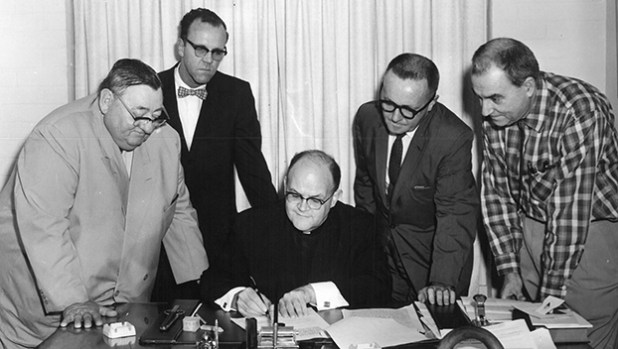 Father Henry Neubig, pictured at center, became the first pastor when St. Joan of Arc was established as an independent Parish on September 21, 1947. 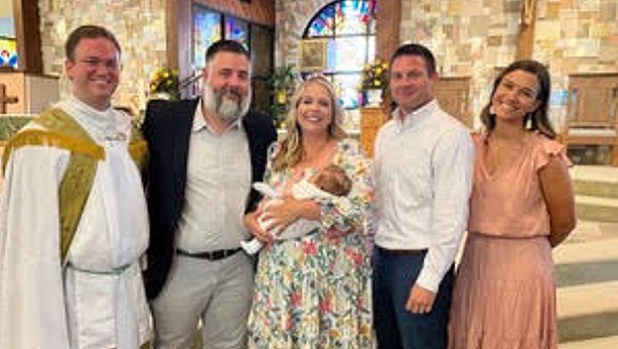 Nearly 75 years after the Church Parish was established, St. Joan of Arc continues to celebrate communions and baptisms within the community. 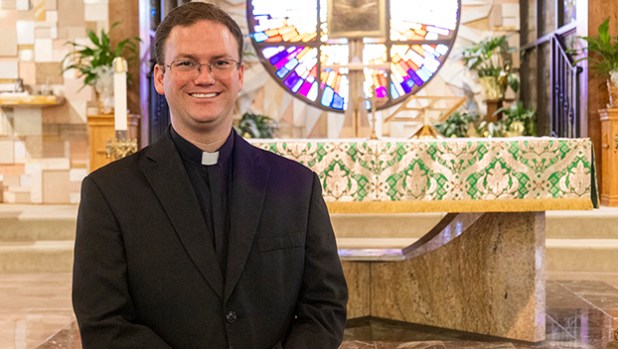 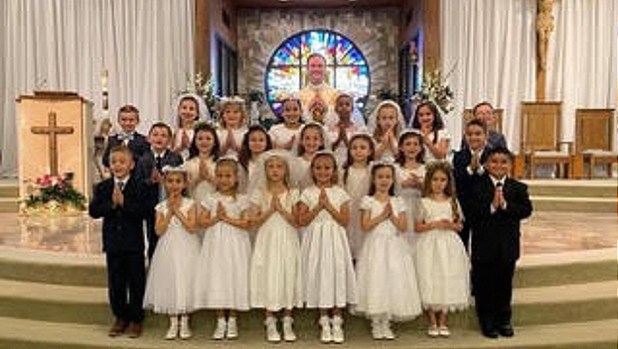 Nearly 75 years after the Church Parish was established, St. Joan of Arc continues to celebrate communions and baptisms within the community.

LAPLACE — Nearly 75 years have passed since St. Joan of Arc, originally a mission of St. Peter Catholic Church, was established as an independent Church Parish to meet the needs of the growing LaPlace community.

While the church building, pastor, and the faces of the parishioners who fill the pews each Sunday have changed over 75 years, Father David Ducote said the Parish’s family feel has persevered through each generation.

“I think it’s a close-knit community. It’s one of those communities that has a lot of older families, and it’s still a small-town community in many ways. Everybody knows each other, and a lot of people have been around for a long time,” Ducote said.

St. Joan of Arc’s 75th anniversary will be celebrated with a special Vigil Mass on September 17 in advance of the Parish’s official anniversary on September 21. Archbishop Gregory Aymond will be in attendance, and former pastors, priests and deacons who have served St. Joan of Arc through the years will be invited to return for the special occasion.

Ducote and the team inside the Parish office have been working to compile a list of original parishioners who have been present for the 75-year journey. Among them are familiar family names including the Orys, the Bradys and the Cupits.

Original parishioner Jackie Cupit remembers a time when homes in the surrounding neighborhoods didn’t have house numbers; the community was so close-knit that the postman knew where everybody lived.

Cupit and her family attended Mass at the original St. Joan of Arc Catholic Church building on West Fifth Street, which currently houses a daycare across the street from John L. Ory.

“Moving to the new church was very good because we had air conditioning instead of fans. It’s a lot larger than the old church, so more people were able to come,” Cupit said.

Cupit believes St. Joan of Arc brought her to where she is today. She’s served as a receptionist inside the Parish office since 2014. Her career as a teacher spanned many years, including four which were spent at St. Joan of Arc Catholic School. She’s also been deeply engrained in the church community as a Eucharistic Minister, a Lector, and a member of the Legion of Mary.

According to Cupit, what makes the church special are the people and the fantastic pastors who have offered guidance throughout the years.

Father Henry Neubig became the first pastor after the Archdiocese of New Orleans established St. Joan of Arc as an independent Parish on September 21, 1947.

The Dominican Sisters from Reserve taught catechism classes in the early days of the Parish. Meanwhile, Peter J. Brady and Armand Montz Jr., the first Lay Directors for St. Joan of Arc, served the Mission Chapel located in Montz.

Father Charles Speaker succeeded Neubig and was installed as the second pastor in September 1950. Under his leadership, the seating capacity inside the church expanded from 273 to 400, opening new doors to continuous growth.

By 1979, the Church Parish had grown so large that it was time to divide. Ascension of Our Lord Church Parish was established the same year to meet the growing need in LaPlace. St. Joan of Arc’s congregation moved to the current Church building at 529 W. Fifth Street, which was dedicated on January 31, 1980. In the new building, Father Pete continued to serve the parish until his passing on Valentine’s Day in 1989.

Monsignor Robert G. Vincent was the next to be appointed pastor. He was already very familiar with the Parish, having served as co-pastor of St. Joan of Arc since 1985. Vincent was succeeded by Father Wayne Paysse in 2001. Paysse left two years later, leaving Father Joseph Dau Nguyen to assume temporary pastorship.

Father William “Billy” O’Riordan served as pastor from 2004 to 2007 and was followed by Father John-Nhan Tran, who served until July 1, 2014. Father Patrick “Pat” Collum became St. Joan of Arc’s 10th pastor that summer.

In 2020, Father David Ducote was installed as pastor after serving one year as parochial vicar for St. Joan of Arc.

Ducote’s time as pastor thus far has included tribulations from the COVID-19 pandemic and Hurricane Ida. However, the Church Parish has continued to uphold and bring back its traditions, including the annual Spring fair, Carnival Ball, St. Joseph’s Altar, and the well-attended Living Way of the Cross. St. Joan of Arc has also continued to support the St. John Ministry of Care using funds collected to help the poor.

Recovery from Hurricane Ida has been slow, but Ducote is hopeful repairs to the church will soon move forward. Despite the storm impacts, St. Joan of Arc was fortunate to only miss one weekend of service. The sanctuary was not severely damaged, and all of the pews survived the storm.

“That first weekend after the hurricane, the electricity was still off. By the second weekend, substantial remediation had taken place to get the water that was in the church out. While we did get a lot of damage to the church, it wasn’t enough to stop us from being able to use it,” Ducote said.

Some families have moved away since the storm, but some have recently returned after being displaced for the better part of a year.

“People have been asking me to bless their homes that they have just finished now that they are moving back, and that’s been a sign of hope and a sign of progress, not only for our Parish, but for the whole St. John community,” Ducote said.