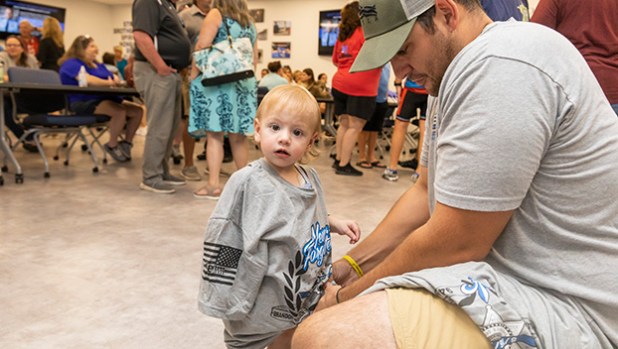 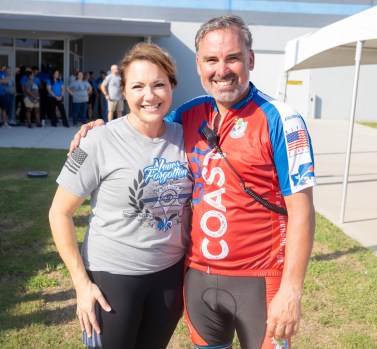 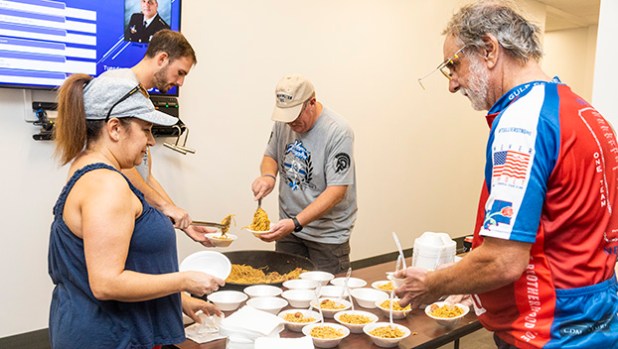 Pastalaya is served during the 10-Year end of watch event. 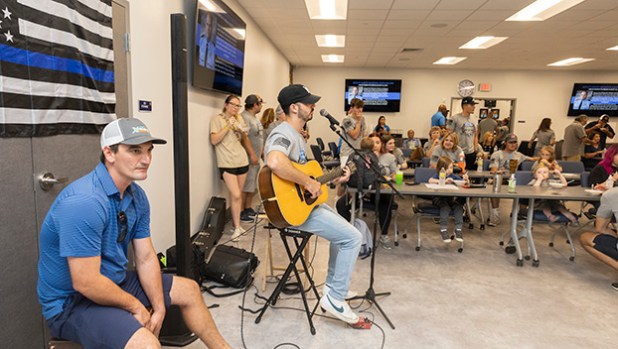 Peyton Falgoust performs during the event. 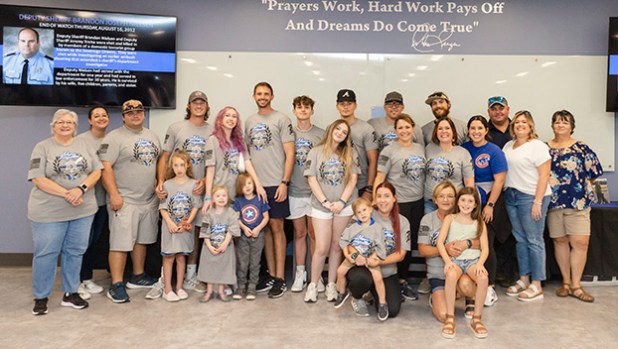 The families of Jeremy Triche and Brandon Nielsen come together to honor their sacrifice on the 10th anniversary of their passing. 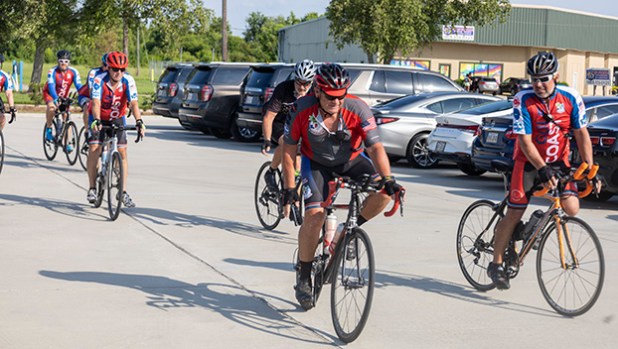 Members of the Gulf Coast Brotherhood Ride arrive at the Lloyd B. Johnson Law Enforcement Training Center in LaPlace.

LAPLACE — Ten years have passed since St. John the Baptist Parish deputies Brandon Nielsen and Jeremy Triche lost their lives in an ambush-style attack in the early morning hours of August 16, 2012.

Family, friends and brothers in blue gathered at the Lloyd B. Johnson Law Enforcement Training Center Tuesday evening to ensure their sacrifice will never be forgotten.

While organizing the event in honor of her late husband, Daniell Nielsen Jenkins knew she didn’t want the memorial to be too structured or formal. Their wedding photos from 2004, displayed on a table at the head of the room, were a reminder of what they loved to do when they were married — get family and friends together and feed them.

Pastalaya and live music highlighted the 10-Year End of Watch program, leading up to a candlelight vigil at dusk.

“I just want people to remember. As the department gets bigger and the area gets bigger, I do feel like they kind of get forgotten because there’s new guys coming in who don’t know their story,” Jenkins said. “It was such a huge thing when it happened. It was at the forefront of everything. As much as I hated that, I think I hate the thought of them not being remembered a lot more.”

Triche and Nielsen were fatally shot by members of a domestic terrorist group known as the Sovereign Citizens while investigating an earlier shooting that left a fellow officer injured. The gunman, Kyle Joekel, was found guilty and sentenced to death on February 9, 2020.

While families of the fallen officers were pleased with the outcome of the trial, it doesn’t change the fact that their loved ones are no longer here.

“The hardest thing for me is my son not being here. It’s been 10 years, and I think my biggest fear is that the actions of that moment, Jeremy and Brandon sacrificing their lives, will be forgotten,” Triche said. “Then I come here, and the hugs are very heartwarming. Even on Facebook, there are posts about Jeremy and Brandon and people telling us we’re in their prayers. People haven’t forgotten. They still remember. It makes my heart proud.”

After the tragedy in August 2012, Jeremy Triche’s 2-year-old son raised a memory candle to the sky and said, “I love you, Dad.” Now 12 years old, Kade doesn’t remember much from when his father was alive, but he knows the legacy he left. He knows August 16 brings back heartbreaking memories for his family.

This week, Triche awoke on August 16 to a text from her grandson: “Grammy, are you okay?”

It breaks Triche’s heart to know her son isn’t here to watch his little boy grow up.

“He doesn’t remember much, but he knows who his dad is and what happened,” Triche said. “For him to have persevered through all this and be an honor student is a blessing.”

During fishing trips down to Cocodrie, Kade starts to open up and ask questions about his father. Fishing was one of Jeremy Triche’s favorite pastimes, which serves as inspiration for Edie Triche to organize the annual Spots and Dots Fishing Tournament in his memory. This year, nearly $50,000 was raised from the tournament to benefit the Deputy Jeremy Triche Fallen Hero Foundation.

The past decade has brought a lot of changes to Nielsen’s family as well. Jenkins wants the world to remember that he wasn’t only a great officer, but also an amazing husband and an outstanding father who loved both his biological and step children with all of his heart.

“He loved law enforcement, and he loved his career, but his family was most important to him,” Jenkins said.

Their children ranged from 6 to 18 years old at the time of the tragedy. Ten years later, there are four grandbabies that Nielsen never had the chance to meet. There have been high school and college graduations and weddings, each one bittersweet.

“I think we do a good job of carrying on his name, but when he’s not there for those events, everything’s got a sting to it,” Jenkins said. “Even with the happy occasions, there’s always a sting.”

An enduring support system helps ease the sting, even if just a little.

On Tuesday, members of the Gulf Coast Brotherhood Ride traveled by bicycle to LaPlace in memory of the deputies’ greatest sacrifice. Bruce Saltalamachia, a retired fireman, wore a shirt honoring Spencer Chauvin, a St. John Parish firefighter who lost his life in the line of duty.

“As time goes, people forget, and our whole motto is never forget. We never forget all the first responders we ride for and all the rides that we’ve done,” he said.