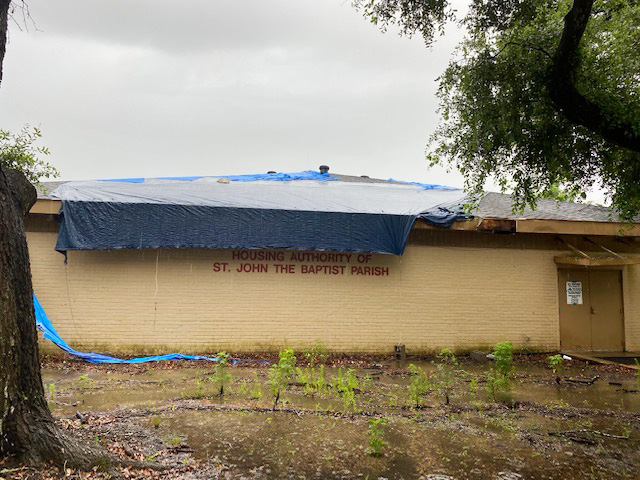 Structures within the St. John Parish Housing Authority, which had already been identified for demolition, received damage during Hurricane Ida. Pictured is the now-vacant Housing Authority office building in LaPlace.

LAPLACE — Slabs, roads and underground utilities that once served public housing developments in Garyville in Edgard have been substantially removed, leaving a blank slate for potential future development at the sites.

The St. John Parish Housing Authority still has decisions to make regarding the LaPlace and Reserve sites. While housing units were demolished in LaPlace, slabs and underground infrastructure remain, along with an office building with a leaking roof that was not included in the demo contract. Also not included in the contract were the dilapidated units at the Reserve Housing Development, which remains vacant and closed off to the public.

Eliza Eugene, a member of the Housing Authority’s Board of Commissioners, said leaving the Reserve development in its current condition presents safety and liability concerns.

“Right now, we are faced with a concern that the Housing Authority is still to maintain that area until it is demolished. That means you have a development that’s not bringing in any funds, yet we have to keep it boarded up. We recently had an issue with someone receiving a citation for going back there. It’s creating other issues by not doing anything with it,” Eugene said.

Demolition is the culmination of a process that began in 2014, when a of units failed to pass environmental clearances. Collapsed plumbing and the presence of asbestos contributed to the assessment that the units were unfit for living. The Housing Authority shifted to offering participants vouchers for Section 8 housing.

During a meeting early this month in Garyville, Eugene asked whether it was feasible to pause work on tearing up roads on the demolished sites and redirect funds to the demolition of remaining units. Commissioner Madeline Jasmine also raised the concern that removing infrastructure would limit the possibility of rebuilding at the sites.

Mark Clayton and Mary Alexander of Perez, APC, the company overseeing the demolition, told the Board of Commissioners that it is better to leave a clean slate for future developers.

“Anything that’s left underground eventually comprises the soil,” Clayton said. “Future developers would have to do a survey to determine what’s underground, which is kind of a headache – an expensive headache.”

Clayton added that the slabs, roads and infrastructure at the Edgard and Garyville sites had already been “taken out to the point of no return.”

However, Clayton said the Housing Authority Board of Commissioners could consider leaving the existing slab, roads and underground utilities at the LaPlace site, which would result in a credit for more than $213,000 to go toward abatement and demolition of the Reserve units.

The total cost to abate and demolish the Reserve site comes in at $1,440,580, meaning the Housing Authority would have to identify nearly $1.23 million in funding.

Eugene asked Acting Director Stacy August to consult with Housing and Urban Development to identify funding for this purpose.

Clayton also said that Perez was working on plans for the demolition of the office building at the LaPlace development, which will require additional funding.

With the old office out of commission, August announced that the Housing Authority has moved to a new office location at 1708 Chantilly Drive Unit D in LaPlace.

The Housing Authority Board of Commissioners will convene again Monday, August 15 at the Garyville Library.