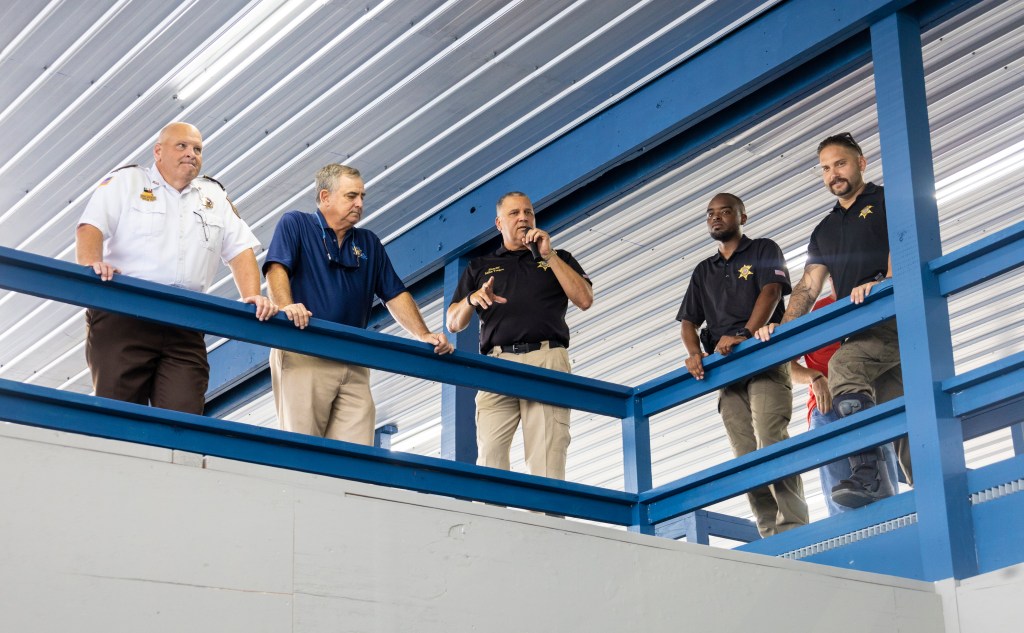 Sheriff Mike Tregre and other law enforcement leaders stand on the catwalk of the new SWAT training facility.

LAPLACE — During his career with the St. John Parish Sheriff’s Office, Captain Octavio “Ox” Gonzalez did the best he could with the resources he had available to construct a SWAT training facility.

His goal was that the facility would be used as an educational tool not only for officers in St. John, but also for agencies in surrounding parishes and across the state of Louisiana.

Gonzalez was tragically killed in 2006 during a manhunt for two suspects who had shot and wounded another deputy.

This week, his wife, Gloria, and sons Bryson and Alexander were present to celebrate the grand opening of the new, state-of-the-art Octavio “Ox” Gonzalez SWAT Complex, a training facility that will keep his dream alive for years to come.

Rather than a cutting a ribbon to commemorate the opening, Gonzalez’ family led a ceremonial detonation on both sides of the new SWAT Complex in LaPlace.

The Octavio “Ox” Gonzalez SWAT Complex features a flexible floorplan that can be re-arranged to mimic the layout of houses, trailers and office spaces to practice active shooter, burglary tactics and hostage situation response. A catwalk offers students and instructors a bird’s eye view of the numerous rooms inside the 6,000 square foot complex.

All interior and exterior doors can be easily replaced after being breached manually, explosively or ballistically.

“As sheriff of St. John Parish, it is my duty and my responsibility to provide my officers with the best resources and training needed to make sure they are confident and courageous in critical situations. As law enforcement officers, we must train, practice and prepare for every criminal action and reaction for the protection of our citizens. All too often, we are unaware of what that situation might be, but that’s where good training comes in,” Tregre said. “This new SWAT training facility, named in honor of Captain Octavio Gonzalez, better known as Ox, will serve not only to help the members of the St. John Parish Sheriff’s Office, but also law enforcement throughout this region, the state of Louisiana, and possibly across the country.”

The new SWAT training center is located on the same grounds as the facility Gonzalez built with his own hands 19 years ago. Over time, weatherization and impacts from the 2016 tornado that struck LaPlace revealed the need for a new facility.

Gloria Gonzalez was overcome with emotion when she saw the completion of the facility as well as the law enforcement officers who attended from near and far to support her family Monday morning.

“I’m so glad that we get to celebrate the new technologies and the trainings that everyone from across the state can use this facility for, which was kind of what he wanted to do, get everybody together to train, work together and help each other. I think that’s what’s happening,” she said.

Bryson and Alexander Gonzalez spoke about their memories of the former SWAT facility, which seemed like a jungle gym to them during their childhood. The boys, now young men, reflected on how much it means to their family to see the community honor their father.

Also during the ceremony, Lt. Jake Boudreaux, commander of the SWAT division, received a surprise promotion to captain.