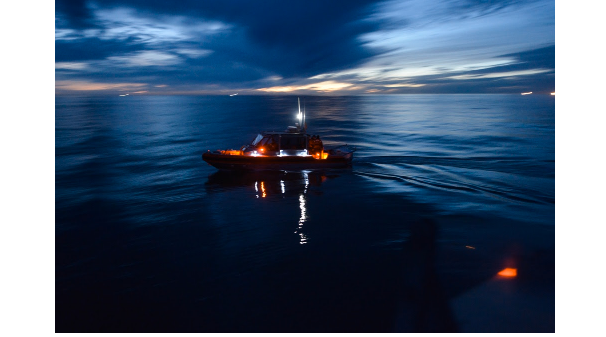 HOUSTON — The Coast Guard and its partners assisted four people Saturday after a fatal boat crash near Freeport, Texas.

Coast Guard Sector Houston-Galveston watchstanders received a phone call at 9:15 p.m. from the operator of a 22-foot pleasure craft stating he had been involved in a boat collision with a 24-foot pleasure craft in the Gulf Intracoastal Waterway between Mile Markers 382 and 384.

Two of the men thrown from the 22-foot vessel swam to the 24-foot vessel, climbed aboard the empty boat and began searching the area for their still-missing family member.

The RB–S crew arrived on scene and rendezvoused with the crew of the Captain Pete, who had found an unresponsive woman thrown from the 24-foot vessel. After the Coast Guard crew took aboard the woman’s body and continued searching the area, they located the third survivor ejected from the 22-foot vessel. He was conscious with a minor head injury.

Around midnight, Gulf Coast Rescue Squad personnel located the other boater thrown from the 24-foot pleasure craft, an unresponsive adult male. The Coast Guard crew took aboard the man’s body and brought the two deceased and all survivors ashore to Surfside Marina in Freeport. Emergency medical services personnel evaluated the survivors and provided care to the two men with minor injuries.

Both vessels are anchored and aground near Mile Marker 382. Texas Parks & Wildlife Department personnel are conducting an investigation of the incident.

“Although this case did not end the way we wanted, with all boaters safe and unharmed, we are thankful that teamwork with our commercial and agency partners enabled us to assist the survivors quickly,” said Chief Warrant Officer 3 Jeremy Borja, command duty officer, Sector Houston-Galveston. “We offer our heartfelt sympathies to the family of the two boaters who didn’t make it and wish them swift healing in the wake of this tragedy.”