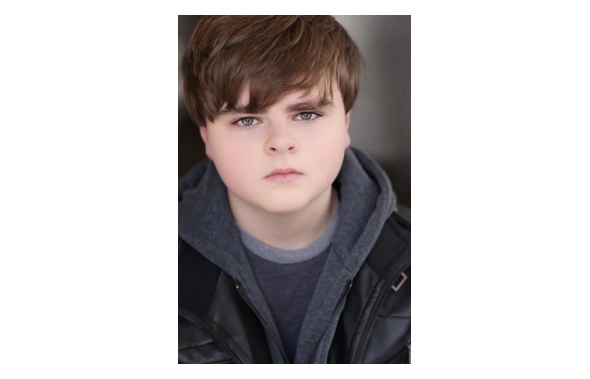 HOOVER – Playing the role of a young person who later becomes a suspected serial killer might sound too dark, too demanding, for an actor who doesn’t even have his driver’s license yet.

For Shelby County teenager Cade Tropeano, however, the role represents a huge step forward in his budding acting career.

Inspired by actual events, “Black Bird” portrays the story of James “Jimmy” Keene (played by Taron Egerton) as he begins a 10-year prison sentence and receives an incredible offer: If he can elicit a confession from suspected killer Larry Hall (the older version played by Paul Walter Hauser), Jimmy will be freed.

When Tropeano landed the role after what his mother described as a “creepy” audition, he didn’t know all of what the job would entail or who he would be working with on set. He didn’t even know the real name of the series yet.

But Tropeano soon learned he would be working alongside an impressive cast, including Egerton; the late Ray Liotta, who played Big Jim Keene; Greg Kinnear in the role of Brian Miller; and Sepideh Moafi in the role of Lauren McCauley.

Tropeano and his mother, Paula Greenway, traveled back and forth to New Orleans for the filming of the series last year.

“Our scenes were filmed in hot and sweaty conditions,” Greenway said. “That was definitely a unique experience, but Taron and Paul were wonderful to Cade. He didn’t film with them because Cade played the younger version of Paul, but we saw them a lot on set. They made a point to always speak to Cade and compliment him on the scenes they had seen.”

Having mentors for what was arguably Tropeano’s most challenging role to date was invaluable, according to Greenway.

“It was a very emotional time,” she said. “It really stretched him to places he had never been before. I think he learned a lot and grew tremendously as an actor from it.”

Tropeano has spent the last six years establishing himself as an up-and-coming young actor with the capacity to take on a variety of roles.

And like other children in the industry, Tropeano started simply with an interest in giving acting a try at an early age.

He was already taking voice lessons, and his music teacher suggested he try acting.

“From the time he could talk, he was singing,” Greenway added. “He has always loved to entertain.”

Acting seemed like a natural addition to singing for Tropeano.

“I was about 7 years old, and I said that I wanted to do acting,” Tropeano recalled. “We found some classes, and we started driving to Atlanta to do different classes. We got smaller roles and started doing voice-overs.”

For those unfamiliar with the term, “voice-over” means the person narrating a piece in a movie or television show is not seen on camera.

“I’ve had people tell me he needed to do voice-over because he was a very good reader from a young age,” Greenway said. “It just came really natural to him.”

Since most of the voice-over work could be done from home, the family built a home studio at their house to give Tropeano convenient access to the equipment he needed for those roles.

Tropeano eventually signed with an agent in Los Angeles, and roughly a week later, he auditioned for and landed the role as Bog in the new Disney Junior series “Eureka!”

“That was his first big voice-over role,” Greenway said. “That was a dream role for him. He booked that and started doing a lot of other animation work and voice-over work.”

Tropeano’s first on-camera role came in “Smoky Mountain Rescue,” a miniseries about a family who finds and rescues a stray dog.

He also had a recurring role in the TV series “Raising Dion” on Netflix.

As Tropeano’s acting work picked up, he and Greenway decided homeschooling was a better fit, especially for the jobs that require extensive travel.

During the school year, Tropeano said he normally tries to complete his school work early in the morning to keep his afternoons and evenings open for auditions and other projects.

Tropeano is the only actor in his immediate family, which also includes his dad, Jason Tropeano, and older brothers, Cole and Connor Greenway.

“If I look back to where we were two years ago, it’s amazing to see he has come as far as he has,” Greenway said. “His kids and grandkids will be able to search the internet and see all this information about him.”

Tropeano doesn’t take his acting career too seriously, however. Like many other teens, he wants to hang out with his friends, laugh and have fun, Greenway said.

“He thinks he’s just another kid trying to earn money to get the next video game that comes out,” Greenway said. “He doesn’t look at it as being famous or a great success. He just looks at it as being another kid that has a job where he gets to meet cool people and go to cool places—just a boy with his two dogs and a microphone downstairs.”

Next for Tropeano is a small role in an episode of “George & Tammy,” an upcoming TV series about George Jones and Tammy Wynette, starring Michael Shannon and Jessica Chastain.

And for those who are interested in acting, Tropeano’s advice is simple: “I encourage anyone who finds a passion for acting to try it out.”