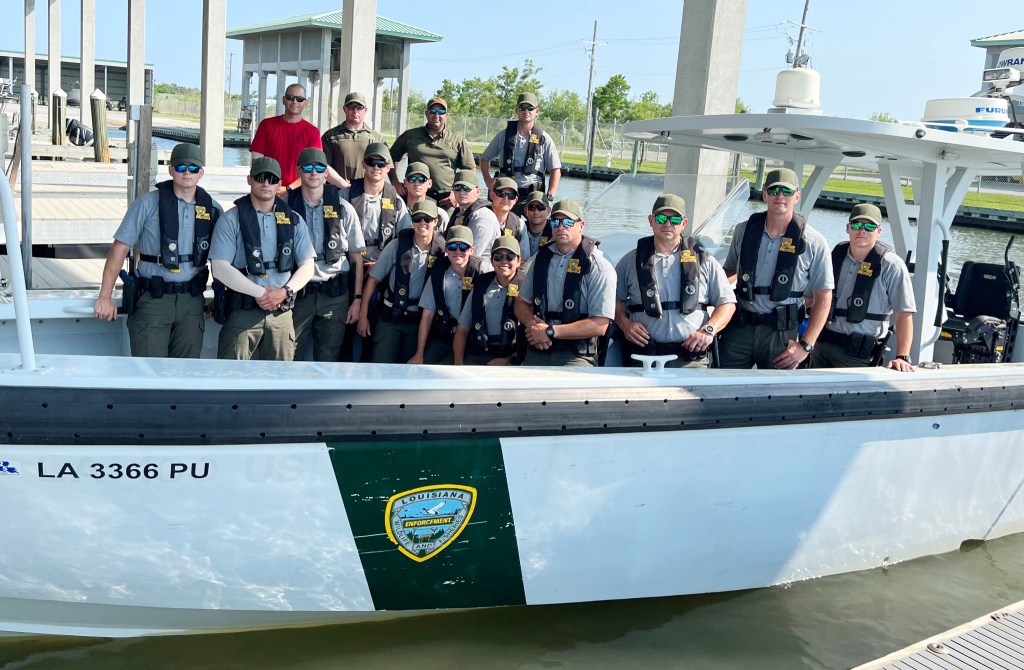 At the academy, cadets train to enforce the state's recreational boating laws. (Photo from Louisiana Department of Wildlife & Fisheries.)

At around 8 p.m. on July 4, the body of 17-year-old Madison Bradley of Slidell was recovered from the Blind River. Agents were notified of a missing boater around 5:40 p.m. According to the investigation, Bradley was a passenger on a pontoon boat with five others and was riding on the bow in front of the protective rail with a male passenger. Both Bradley and the male passenger went overboard when the boat hit a wake from a passing vessel. While the male passenger resurfaced with minor injuries, Bradley suffered severe prop strikes and did not resurface.

The operator of the vessel, 33-year-old David Crowe of Denham Springs, was arrested for vehicular homicide, operating a vessel while impaired (DWI), and reckless operation of a vessel.

In Louisiana, a DWI on the water carries the same penalties as a DWI on the roadway, including prison time, fines and loss of driving/boat operating privileges.  The first offense typically carries a $300 to $1,000 fine and up to six months in jail. Wildlife & Fisheries is involved in the Operation Dry Water awareness and enforcement campaign.

Heightened enforcement was in place over the recent Fourth of July holiday weekend. From July 2-4, 12 boaters were arrested statewide for allegedly operating a vessel while intoxicated. This included arrests in Natchitoches, Assumption, Rapides, Livingston, Calcasieu, pointe Coupee, Union, St. Martin and Terrebonne parishes.

Another four individuals were arrested for DWI on waterways in the last week of June, according to LWF press releases.

“They can get high traffic, especially during peak season with Memorial Day weekend, Fourth of July and also Labor Day weekend. They are pretty busy most of the summertime,” Einck said. “The Blind River has a lot of curves in it, so do you have to be mindful that you stay on your side of the water and follow the rules of the road for waterways. Other than that, all boating safety applications apply pretty much universally.”

According to Einck, the three most important points when it comes to boating safety are to wear a life jacket, have a sober operator at all times, and take a boating education course.

“Boating education courses are offered statewide, year-round,” Einck said. “Anyone can take the course in-person or online, but it’s mandatory for anyone born after January 1, 1984. We have boating safety instructors in each region of our state. Usually, almost anybody in the state can find one that’s pretty close by.”

Boating education courses are generally eight hours long and cover topics including trailering and launching your boat, how weather and alcohol use factor in on the water, and the importance of life jackets.

A full schedule of upcoming boating education and hunter education classes can be found at louisianaoutdoors.com/events.

Other boating safety tips courtesy of Wildlife & Fisheries include planning a boating route close to the shore and checking the weather forecast for rainstorms, wind velocity, fog possibilities and tidal conditions before boarding a boat.

It’s also important to stay on the correct side of a waterway, avoid overloading a boat with people or equipment, maintain a safe speed and use a handhold when moving around a vessel.

For more information on boating safety, visit the Louisiana Department of Wildlife & Fisheries website at wlf.louisiana.gov and go to the boating tab to view regulations and other resources.