LAPLACE — Ian and Adrienne Arnett started their athletic journeys the same way. At 5 years old, they each picked up a tee-ball bat on the LARAYO field as their father taught them to swing.

Now attending high school at St. Charles Catholic, these siblings have continued to mirror each other’s successes through the years. Ian and Adrienne were among a select group of athletes named to the Class 2A All-State Team for baseball and softball, respectively.

Ian, a rising senior, has played on the Comets varsity baseball team since his freshman year. He stepped up during his junior season and made big contributions on the state championship team as a second and third baseman, while also serving as a lead-off hitter.

Ian had two hits during the semifinal win against Notre Dame. Coach Stein said Ian showed strong defensive play during the championship against St. Thomas Aquinas, which helped the Comets to earn their second state baseball title in three years.

It was a year of big moments and new experiences for Ian.

The Lady Comets softball team also had a monumental season that culminated in a championship appearance. Adrienne Arnett was among the youngest on the team, but she proved that eighth graders can compete with the best when she slammed three hits, including a double, against top-ranked Notre Dame in the finals. She proved to be instrumental as a starting shortstop during the championship and throughout the season.

Like her older brother, Adrienne has grown up playing ball at LARAYO, St. Joan of Arc and on travel ball teams coached by their father.

Athletic ability seems to run in the family – Ian and Adrienne’s younger sister may not be a future softball star, but her talent shines on the dance floor. Meanwhile, their father Willie Robert played baseball and football at Assumption years before showing his children the ropes of the game.

“My dad has always been there for us. He’s always coached us and has been around at most of our games,” Ian said.

Adrienne said travel ball experiences prepared her for success at St. Charles Catholic. After playing against older age groups with the Louisiana 007 travel team, it felt natural to compete with upperclassmen as an eighth grader on the Lady Comets team.

Ian and Adrienne also compete in swimming at St. Charles Catholic and both qualified for the state meet this past season. Both are honor roll students who have received recognition beyond athletics. Ian is a member of SCC’s Retreat Club, while Adrienne was voted “outstanding young woman” of her eighth-grade class.

Both siblings can see themselves pursuing athletics in college if a scholarship offer is in the cards. For now, they are proud to have made All-State for the first time.

“You can just look at the list and see that your hard work pays off,” Ian said. 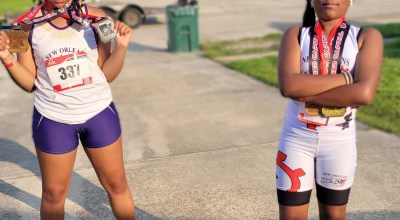