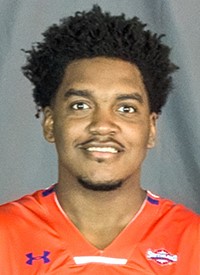 On March 5, during the final game of the regular season, Darius Lee was a statistical dream.

In a game against McNeese State that went four overtimes, Lee scored 52 points, grabbed 18 rebounds and played 52 of the 60 minutes.

The Houston Baptist guard/forward not only set a record for points by a Husky but also a Southland Conference mark.

The 21-year-old senior was shot and killed as part of a mass shooting at a Harlem park in his home town of New York City.

The incident took play in the early morning minutes Monday, said police, who responded to calls about 12:40 a.m. Eight others were wounded.

His death left two communities stunned and mourning at a time when the entire country grapples with such news far too often.

“It is just very sad,” said McNeese head coach John Aiken. “It leaves a hole in our league and in their program, but it’s even a much bigger loss for the family.

“We talked about it with our kids, who you have to value every day. You just don’t know when it can be all taken away.”

Lee, who was home for summer break, attended high school in the Bronx and was in the park with friends. Police say they don’t have a motive or a suspect for the incident.

The shooting was so close to Lee’s home that his mother could hear the shots and quickly tried to call him, but there was no answer.

“This is something different that nobody expected,” Lee’s father Eric Lee told the New York Post. “He don’t curse, don’t hang out, don’t drink, don’t do anything. He just plays PS5 and plays basketball.” .

But this ending isn’t different enough. It’s something we hear about way too much.

Basketball was Lee’s love and ticket to a better life, dreaming of one day playing for the hometown Knicks, his dad said.

“He had a terrific future ahead of him as a pro player,” said HBU head coach Ron Cottrell. “Just one of those guys you knew the future was bright for. Darius Lee, he was gonna do something special.”

Unfortunately, he will never get that chance.

“We are in shock and cannot wrap our heads around this news,” Cottrell said in a statement posted on HBU’s website. “My heart breaks for his mom, his sister and his entire family, and for our basketball team. … As great of a basketball player as he was, he was an even better person.”

Lee’s death came soon after he was named HBU’s Male Student-Athlete of the Year. The second-team all-Southland Conference selection led the Huskies in scoring and rebounding and finished sixth in the nation in steals per game.

That, however, will only be some of the stats Lee will now be remembered by.

He joins the many young people to have their lives cut far too short. Whatever the reason for the shooting, its result is another flame has been flickered out before it ever got a chance to burn its brightest.

While watching these athletes perform we often forget they are made of flesh and blood. Against McNeese, Lee was one of those guys.

He bullied his way to the basket against the Cowboys all night, especially during the critical overtimes when he was simply unstoppable.

Jim Gazzolo is a freelance writer who covers McNeese State athletics for the American Press. Email him at jimgazzolo@yahoo.com

Ask Rusty – What are my wife’s benefits while I’m living & as my widow?

Fueling our homes and cars: Biden scoffs while we suffer