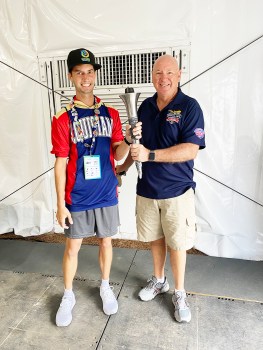 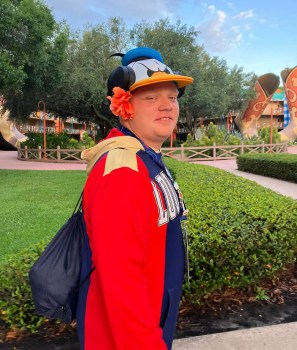 Michael Love traveled to Orlando and competed at the Special Olympics USA Games for the first time earlier this month. He earned second, third and fourth place finishes in swimming events. 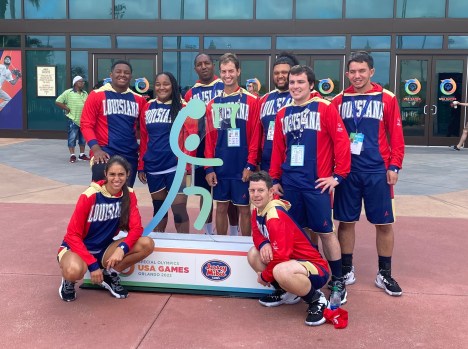 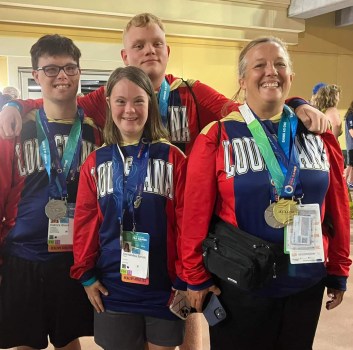 Michael Love, pictured in the back with his arms around members of the Team Louisiana Special Olympics swim team, found success in the 4x50 relay, the 50m butterfly and the 100m freestyle.

The theme of this year’s event was “shine as one,” and that’s precisely what the athletes did. Michael Love placed second in the 4×50 relay, third in the 50m butterfly, and fourth in the 100m freestyle during his first Nationals experience. Oneil Legendre also represented the local Special Olympics team and made great contributions on the Team Louisiana basketball team, placing fifth at the USA Games.

Love, 19, has competed in swimming for the past 12 years. He entered the USA Games with a goal in mind and followed through with astounding grit and determination. His family didn’t realize until after the competition that he was coming down with the flu, but no one ever would have been able to tell he was sick by the way he raced through the water without complaint.

“He’s not going to let anything stop him from achieving his goals. This is something he can carry with him throughout his life,” his mother, Connie Love, said. “As a parent, I was very proud of him and watching him compete. All the hard work he put in paid off, and he did awesome.”

Michael Love said attending the USA Games was the experience of a lifetime. He felt a mix of emotions stepping up to each event – everything from excitement to fear and exhilaration.

If Love is among the state selections, he will go to time trials near the end of the year in anticipation of the global games. He is continuing to work hard in the pool to perfect each stroke, preparing for the possibility of competing in Germany.

Oneil Legendre, 27, was a member of the Team Louisiana Basketball 5×5 Unified Team. The team played three pool games early in the week before entering bracket play on June 9. Team Louisiana played hard and fought all the way to the end but ultimately placed fifth at the USA Games. Legendre had numerous three-point shots in each game and played great defense throughout the entire experience.

“We are so proud of him and all the players on the team,” said his mother, Renee Legendre.
“Our entire family of 10 journeyed to Orlando to cheer him on. No words could actually express how we all felt watching from the opening ceremony to each game they played. There are so many memories and feelings from that week that we will remember always and continue to talk about daily. This was definitely an experience for Oneil to cherish.  He had such an amazing time being a part of it all.”

Oneil started participating in Special Olympics while attending the University of Louisiana at Lafayette in 2015. He joined the local team after moving back to St. Charles Parish in 2020.

His competitive nature has allowed him to adapt quickly to new sports.

While Special Olympics is known for inclusion through sports for people with and without intellectual disabilities, the organization’s impact in the River Parishes expands far beyond athletics.

Basketball, track and field, bocce, bowling, softball and swimming are offered to athletes, but organizer Connie Love reminds the community that Special Olympics is more than sports.

“We do Halloween parties, Christmas parties and bowling parties. Sometimes we go to the movies, have pizza parties, or go to high school football games. There are many things we do where they can engage and interact,” Love said.