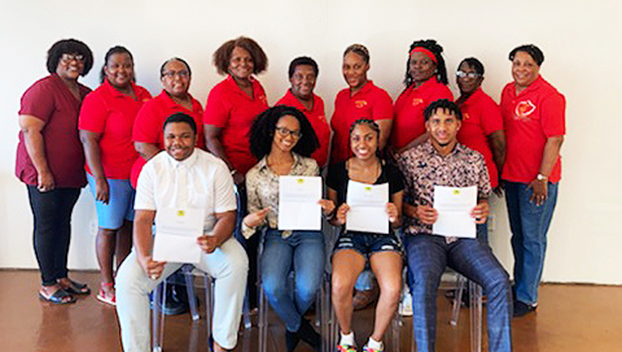 LAPLACE – Apples are more than just a signature throw from the Krewe of Dagé Mardi Gras floats that parade through LaPlace. They are a symbol of the group’s commitment to local education.

Guided by the motto “education is key,” Krewe of Dagé recently presented $6,000 in scholarships to students in the River Parishes. Three recent graduates from St. James Parish and one recent grad from St. Charles Parish each received $1,500 to support their higher education expenses.

The four recipients were:

Krewe of Dagé president Jean Stewart said the goal is to make the scholarship program bigger and better every year. As COVID-19 restrictions loosen, Stewart said now is the time for Krewe of Dagé to get more involved in the local school system.

“We are talking to a few teachers, Councilwoman Tyra Duhe being one of them, about getting into the school system and being more visible. We want to read to the kids and be part of back-to-school giveaways,” Stewart said. “Maybe next summer, we want to sponsor a couple of kids and send them to swimming lessons.”

Krewe of Dagé also wants to invite children to ride on the floats during the next Mardi Gras season.

“We’re going to extend recommendations to the schools for a child to ride on the float for free. We’re going to continue to do that so they can see positive things though something as simple as riding on a float and knowing what it’s like to experience that,” Tuircuit said. “We’re not looking for the perfect student with all ‘A’s. We’re looking for the child who works the hardest, who might be struggling and still can’t get that ‘A’.”

Tuircuit would also like to see the annual Krewe of Dagé scholarship garner more participation from St. John the Baptist Parish students.

Scholarship funds were raised from the Krewe of Dagé Queen contest and Carnival ball. Students must be attending a four-year university to qualify, and this year’s application asked questions regarding career ambition, extracurriculars and community service. With the uptick in youth crime in the New Orleans region, students were also asked what steps they would take to curb violence.

“Most of them talked about children needing role models,” Tuircuit said. “They see a lot of stuff on TV and think it’s OK. They want us to show them good role models instead of showing them the bad side of everything.”