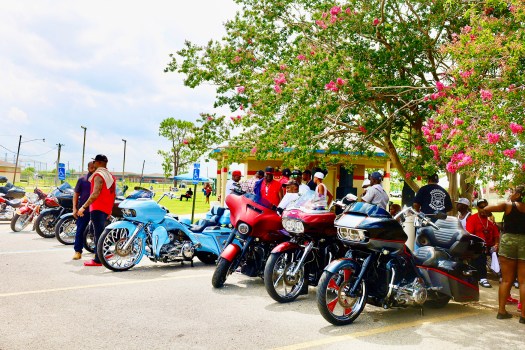 Motorcycles are lined up at REGALA Park in Reserve as motorcycle clubs from across the Southeast United States travel to St. John Parish to celebrate the fourth anniversary of the Street Hogs New Orleans Chapter. 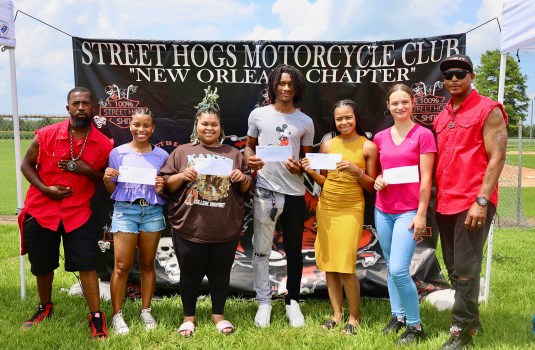 RESERVE — When Loumonth Jack of the Street Hogs Motorcycle Club New Orleans chapter passed away in November 2018, his biker brothers started the “Ride for Success” scholarship to give back to the River Parishes community in his honor.

This past weekend marked the fourth anniversary of the New Orleans chapter, comprised of riders from St. John the Baptist and St. James parishes. Festivities drew in motorcycle clubs from across the Southeast United States for a “meet and hang” at the Double Tree by Hilton in Kenner, a day party at REGALA Park in Reserve, and an anniversary celebration at the Dufresne Center in Luling. While in Reserve, the Street Hogs presented six scholarships to deserving recent graduates who will soon head off to college.

“Four years ago, we came together with the same mindset, to ride bikes but also do some community outreach,” said Street Hogs N.O. Chapter President Tony English. “One of the things we focus on is our scholarships. This year, we are going overboard and giving away six. A lot of people have the wrong conception (about motorcycle clubs). They have bad clubs out there, but we are one that wants to make a difference. We are the community. All of us work here, and we want to support our parish.”

Many of the Street Hogs members are fathers, and several had children graduate from high school this year. Understanding the importance of supporting local education, the Street Hogs created a scholarship application for seniors attending college in the fall. In order to be eligible, students had to be from the St. John or St. James area, have an acceptance letter to an educational institution, and secure a recommendation from a teacher.

St. John STEM Magnet Program/ East St. John valedictorian Adison Cooper was one of this year’s deserving scholarship recipients. Cooper has persevered through COVID, Hurricane Ida, and the unexpected loss of her mother in high school, and she will soon begin a new journey studying early childhood education at Southeastern Louisiana University.

“I have a full schedule, so getting a scholarship will really help me adjust without having to worry about working as soon as I get to college,” Cooper said. “Coming from a single parent home, it’s going to be a big help, and I’m grateful that the Street Hogs gave this opportunity to me. I plan on using it to further my education in education.”

Also representing the STEM Magnet Program is scholarship recipient Ty’Jon Monroe, who was named salutatorian for West St. John High School. Monroe maintained an excellent academic performance while earning back-to-back state track and field championship titles in the 110-meter hurdles. He will attend Northwestern State University in the fall to pursue mechanical engineering with hopes that technology can be a driving force to help the world. Monroe will also pursue his athletic career in college and beyond. He dreams of one day becoming a U.S. Olympian for track and field.

Scholarship recipients representing St. James High School in Vacherie were DaiJah Burham and Ashley Octave. Burham will be attending Grambling State University to study criminal justice, and she has a desire to help others in need by donating to charities. Octave will attend Baton Rouge Community College to pursue a career in the liberal arts field.

Also representing St. James Parish were recent Lutcher High School graduates Kaden Rhys Harrison and Keimani Borne. Harrison will attend Louisiana State University to study biomedical engineering. His dreams for the future include building prosthetics and robotic medical equipment. Borne plans on obtaining both her bachelor’s and master’s degrees in nursing from Nicholls State University. After college, she dreams of working as a pediatric nurse practitioner.

The Street Hogs anniversary weekend was a great success despite the stifling heat and threat of rain. Motorcycle clubs from New Orleans, Houston, Dallas, Memphis and Little Rock brought their bikes and joined in the fun.

According to treasurer Eric Perrilloux, the local Street Hogs chapter gives back to the community in various ways. The club sponsors the Grays baseball team in St. John Parish by purchasing uniforms for the season. When a motorcyclist was killed in LaPlace, the Street Hogs held a fallen biker ride to show solidarity.

During the anniversary celebration, the Street Hogs supported local businesses by inviting food vendors to come out at no charge.

For more information about the local motorcycle club, find Street Hogs on Facebook.