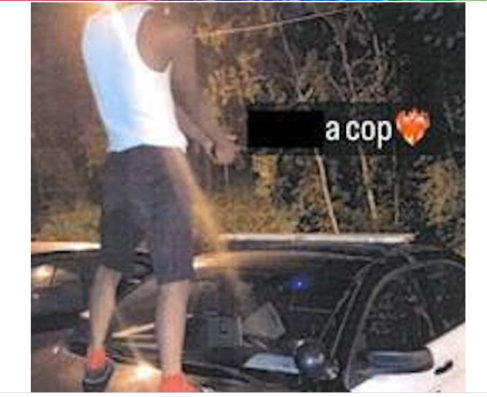 A 17-year-old boy was arrested Monday after posting to Instagram a photo of himself standing on the hood of a fully marked Lake Charles Police unit, pointing a handgun through the driver’s side windshield.

Deputy Chief Franklin Fondel said this isn’t the first time the boy posted such a photo.

Fondel said on May 12 a photo posted to the same Instagram account shows a hand holding a gun pointed through a window of a fully marked LCPD unit. That photo was taken while the officer was away from the unit while responding to a call at a local apartment complex.

Detectives were able to secure a juvenile custodial affidavit, signed by Judge Mitch Redd, for illegal possession of a handgun by a juvenile and threatening a public official, Fondel said.

On Monday, SWAT team members spotted the juvenile traveling in a vehicle along with other occupants. The officers made contact with the juvenile at a business in the 3800 block of Gerstner Memorial Drive.

Fondel said the juvenile was armed with a handgun at the time. He was taken into custody without incident and a second weapon was seized from the vehicle in which he was a passenger.

Evidence indicates that both handguns seized are the same firearms used in the two Instagram posts, Fondel said.

The juvenile remains in custody at the Juvenile Detention Center.

Fondel said the investigation is ongoing and anyone with information is asked to contact lead Detectives Sgt. Dustin Fontenot or Sgt. Kevin Hoover by calling 337-491-1311.