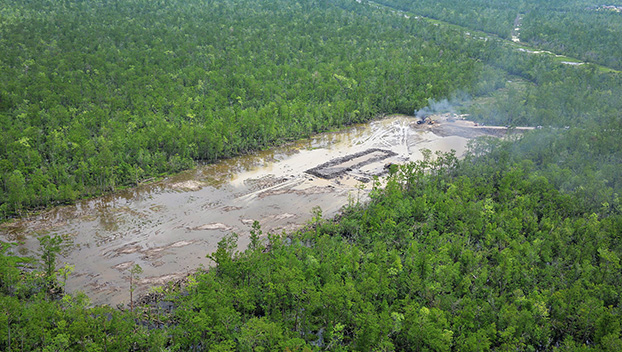 This aerial photograph from the U.S. Army Corps of Engineers shows work underway on the West Shore Lake Pontchartrain Levee Project in May 2022.

According to Sr. Project Manager Bradley Drouant, $3 million in funding has been provided for a West Shore Lake Pontchartrain General Re-Evaluation Report to focus on increasing resiliency. Timing and scope of this report will be based on guidance from the U.S. Army Corps of Engineers Headquarters.

Up to $450 million in additional construction funds have been approved for the West Shore project pending the completion of the re-evaluation report. The goal is to establish a recommended plan of increasing resiliency that is economically justified and environmentally acceptable. According to the June stakeholder update, there is also the potential of establishing economically justified alternatives for storm surge protection in St. James Parish.

This month, non-federal sponsors Louisiana Coastal Protection and Restoration Authority (CPRA) and the Pontchartrain Levee District will continue working to provide documents for the Feasibility Cost Sharing Agreement package to be prepared. This marks the first step in moving the re-evaluation report forward.

Construction on the West Shore Levee is projected for the second half of 2022, and the team’s goal is to have detailed designs completed so that contracts may be awarded as access road construction is finalized.

Either WSLP-109 or WSLP-110 is anticipated to be the first levee reach contract awarded. Both of these reaches are located north of Garyville in St. John Parish.

Sand placement on reach 101 at the eastern end of the levee alignment near St. Charles Parish is expected to begin in early June and continue for a 145-day base duration. The SP1 contract was awarded to Phylway on April 20, 2022 for a base amount of $1.2 million.

The Army Corps of Engineers received right-of-entry earlier this year to being surveys and boring work for the St. James portion of the project. Surveys and borings are now underway and are due on July 22.