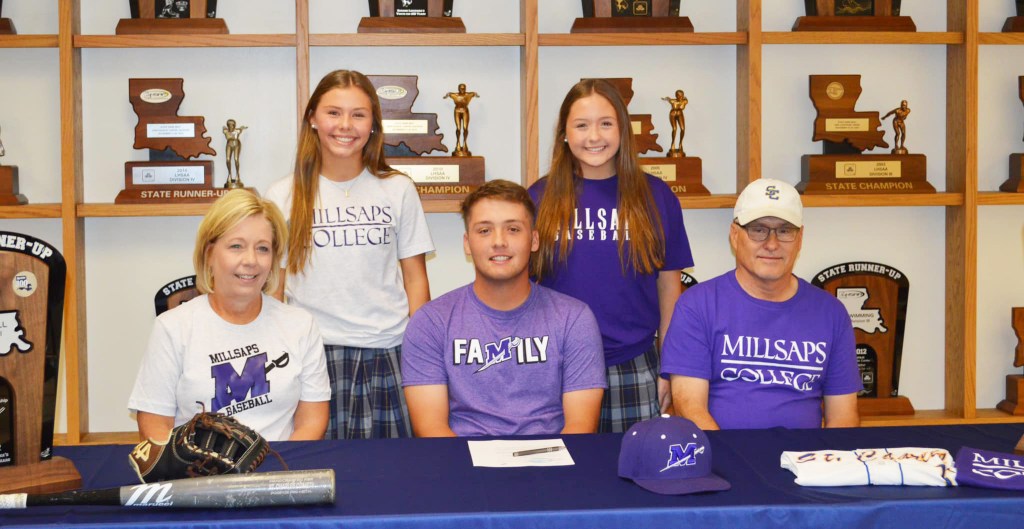 St. Charles Catholic graduating senior, Ryan Laiche is surrounded by parents Robert and Jodi Laiche and sisters Lauren and Julia Laiche as he commits to play baseball for Millsaps College in Mississippi.

LAPLACE — St. Charles Catholic baseball coach Wayne Stein always saw Ryan Laiche not for the baseball player he was, but for the athlete he could be. Tough love helped Laiche reach his full potential, and the fruits of those labors shined through during a recent signing day ceremony held in the Comets field house.

Laiche, a pitcher and first baseman on the 2022 Comets Championship baseball team, will continue his journey at Millsaps College in Jackson, Mississippi.

Laiche has been a part of the Comets baseball program since eighth grade. He played on varsity for three years, but it wasn’t until Summer 2021 that he grew stronger and came to the realization that he could compete on the college level.

His days of travel baseball seem far in the rearview mirror compared to where he stands now, both physically and emotionally.

“When I was younger, I used to struggle with getting emotional while playing baseball, and Coach Wayne really changed all of that for me. He made me into a better person. Once I got to St. Charles, I knew that I wouldn’t have a chance of staying on the team if I kept doing that. He made that clear,” Laiche said.

Before Laiche knew Stein as a coach, he knew him as a neighbor.

“It was a tough love. He was really hard on me, but he knew he could have that type of relationship with me because I knew him on a personal level and not just a baseball level. He knew that was the best way to mold me into what I am today,” Laiche said.

Laiche will primarily pitch at Millsaps, but he also anticipates playing on the field. Millsaps became his clear college choice after meeting Coach Jim Page.

“The coach was super nice, and he expressed how interested he was in me. When I visited a couple of times, it just felt like a great place,” Laiche said.

Laiche enjoys being part of a team, watching his peers grow throughout the season and, of course, winning championships.

He’ll never forget part of the 2022 championship team. There were moments during that final game where he had to step back and refocus because the roaring crowd brought so much energy to the stadium. Another memorable moment was hitting a home run in an earlier game against Lutcher.

Laiche was also a member of St. Charles Catholic’s Division III state championship football team after deciding to try the sport for the first time during his senior year. It was a great experience, and he was able to get in on some formations as a tight end.

Like baseball, golf has been a constant for Laiche during his time at St. Charles Catholic. The team closed out the year by taking fourth at the regional tournament and sixth at the Division III state championship. At state, Laiche had the best total among the members of the Comets team.

Laiche is the son of Robert and Jodi Laiche of LaPlace. During his signing ceremony, he was also joined by sisters Lauren and Julia Laiche.

In college, he plans to study business or accounting.