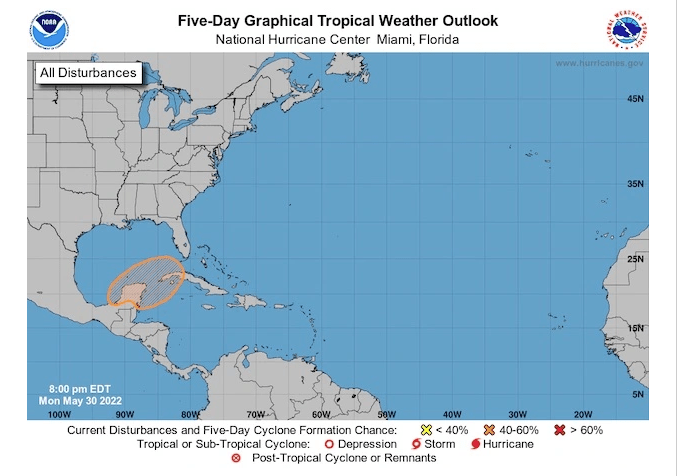 There is a medium chance of tropical development forming near the Yucatan Peninsula and the northwestern Caribbean Sea in a few days, the National Weather Service’s Lake Charles office said.

A large and complex area of low pressure is expected to develop near that area, partially related to the remnants of Hurricane Agatha from the eastern Pacific.

This system is forecast to move slowly eastward or northeastward, and gradual development is possible by the latter part of this week.

The agency said there is a 40 percent chance of formation within the next five days.

“Although there is still some uncertainty with this system, at this time there are no expected impacts for southeast Texas, as well as Southwest, central, and south central Louisiana,” the agency reported.

Wednesday will mark the first day of the traditional hurricane season. For 2022, the NWS predicts up to 21 named Atlantic storms, well above the average of 14. Forecasters are also expecting more major hurricanes than average.

According to Colorado State University, the chances of Louisiana getting hit with a named storm within 50 miles this season are 84 percent.

Get ready for the Rougarou minor league baseball team