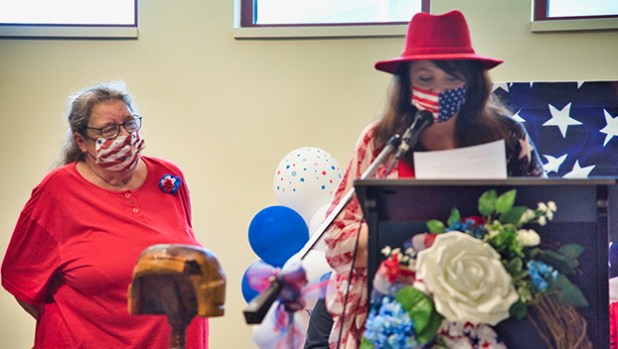 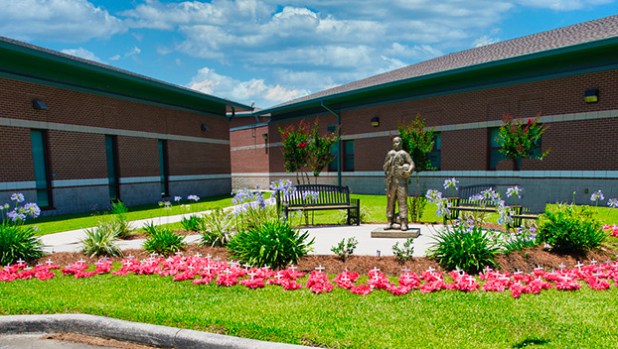 Red poppies are strewn across the white crosses of sleeping soldiers in a replica of the Flander’s Fields battleground outside of the Southeast Louisiana Veterans Home in Reserve.

RESERVE— Red poppies were strewn across the white crosses of sleeping soldiers in a replica of the Flander’s Fields battleground outside of the Southeast Louisiana Veterans Home in Reserve.

During a Memorial Day program held on May 27 — the first large scale event at the home since the start of the COVID-19 pandemic — Janice Church of LaPlace tearfully read a poem written by Lieutenant Colonel John McCrae following World War I.

In his poem “In Flander’s Fields,” McCrae was stricken by the red poppies that grew along the crosses of soldiers who had died on the Western Front.

Church, a retiree from the Southeast Louisiana Veterans Home, wrote a poem in response to “Flander’s Fields” 100 years after the start of World War I. In her poem, she reflected on the poppies, so delicate and red, that seemed to soak up the blood that had been shed.
“That red poppy became the universal symbol of the lives that were lost, defending our freedoms at a huge human cost,” Church said. “We wear a poppy to remember the sacrifices they made. We wear a poppy to thank those who served and the courage they displayed.”

The poppy display served as the backdrop of the laying of the wreath, led by 102-year-old Ubert Terrell and 100-year-old Ruth Knutson, World War II veterans residing at the Southeast Louisiana Veterans Home. A 21 Gun Salute led by VFW Post 5852 preceded a solemn balloon release in memory of fallen soldiers.

The inside of the Southeast Louisiana Veterans Home was adorned with flags and shades of red, white and blue as Darrin Labarthe of Elks Lodge in Metairie read the history of the Memorial Day Holiday.

Originally known as “Decoration Day,” the annual remembrance event was first adopted by the United States in 1869. It became known as a day to honor fallen soldiers by decorating their graves throughout the country. By the late 1960s, Decoration Day was renamed Memorial Day.

Labarthe finds inspiration in the words of Emily Potter: “Heroes never die. They live on in the hearts and minds of people who follow in their footsteps.”

He added that the people gathered in the Veterans Home Friday were among “some of the greatest people that this country has ever produced.”

Navy veteran Harold Keller, master of ceremonies for the event, agreed with Labarthe’s words.
“I like football, but none of them are my heroes. My heroes are over here at the War Veterans Home,” Keller said. “This home right here is one of the best kept secrets in Louisiana.”

Guest speaker Allan Reynaud, commander of American Legion Post 383 in LaPlace, shared that he grew up surrounded by veterans. It was no surprise when he enlisted in the Navy in 1969; following in his heroes’ footsteps was always part of his plan.

Along the way, he learned about the honor and sacrifice of those who came before him.

According to Reynaud, the total casualties of American soldiers in the history of the country amounts to approximately 1,354,000. There have been roughly 2,852,000 deaths and injuries recorded, and 40,000 are still considered missing. As of May 2021, there were approximately 19 million veterans living in the United States.

“Veterans are one of the most valuable resources this country has. We can move worlds,” Reynaud said. “We have the dedication, self-discipline and the mindset to protect ourselves, to protect each other, our families and our country, and I thank you for your service.”

Activities Director Sonya Hebert read aloud a list of names of the veterans who have passed away since the last Memorial Day program at the Southeast Louisiana Veterans Home.

The Memorial Day event also featured the presentation of colors from American Legion Post 383, a welcome address from Administrator Brian Fremin, the Pledge of Allegiance by Timmy Whipple, and renditions of the National Anthem and Amazing Grace by Marva Coleman.