Local man is one step closer to becoming a priest 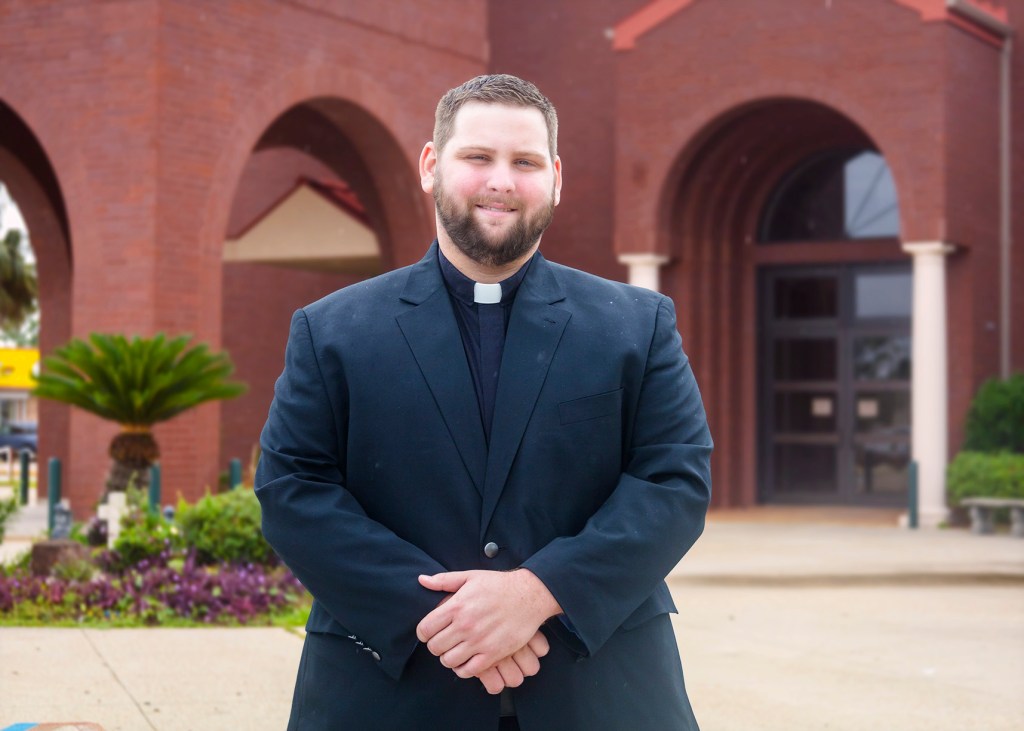 Cory Ford, a lifelong parishioner of Ascension of Our Lord Catholic Church in LaPlace, is only one year away from completing his education and becoming a priest. He will be the deacon intern this summer at St. Ann Church and National Shrine in Metairie.

LAPLACE — Cory Ford was at a crossroads in his life, torn between a future in engineering and a call to priesthood when a moment of silence determined his future.
During the consecration at his brother’s Confirmation Mass in October 2014, Ford felt the church fall silent. A pause that normally would have lasted three to five seconds seemed to stretch for several minutes, only to be broken by a voice that beckoned, “Cory, follow me.”
Ford, a lifelong parishioner at Ascension of Our Lord Catholic Church in LaPlace, is now completing his final steps in his journey to becoming a priest.
On May 21, he was ordained into the Transitional Diaconate by Archbishop Gregory Aymond during a ceremony held at St. Louis Cathedral in New Orleans. Ford delivered his first homily on Sunday at Ascension of Our Lord during the 10:30 a.m. and 7 p.m. Masses.
This summer, Ford will serve as the deacon intern at St. Ann Church and National Shrine on Transcontinental Drive in Metairie. Following his last semester of classes, he will be ordained a priest on June 3, 2023.
Ford is excited to finally put into practice what he has learned over the past six years in the seminary.
“The deacon internship is really the first time you get to be a minister. For the last six years, even when I was in the Parish, we were following the priest to learn as much as we can. I was always assisting someone. This time, I can finally take my knowledge and apply it to help people grow in their faith,” Ford said.
Once he becomes a priest, Ford will serve as a spiritual guide through life’s most joyous and somber moments.
“I’ll be able to walk with people when they get married, and when they have kids and need a baptism. When it comes time, I will be able to help them through the grieving process and bury their loved ones,” he said.
Though he didn’t realize it at the time, the seeds of Ford’s vocation were planted long ago. He was only 11 years old when his grandfather mused that he would make a great priest someday. Each time he heard Archbishop Aymond comment on the presence of future priests in the church pews during Confirmation Masses, the words resonated deep within him. It was a thought he couldn’t shake, like lyrics to a song playing on repeat in his head.
After completing his sophomore year at Louisiana Tech University, Ford joined the seminary in August 2015 and never looked back.
Medical challenges have added some bumps along the road, but these challenges have never swayed Ford from God’s calling for his life.
Gallbladder surgery and a lung infection preceded a frightening Stage 3 melanoma diagnosis in January 2020. What was initially anticipated to be a simple procedure on February 14, 2020 turned into a six-hour surgery in which an 8-by-3-inch section of his back was removed.
The recovery was extensive, and he needed assistance with all aspects of daily living for the first four months. Ford had to brave 15 months of cancer treatment before receiving the all clear in April 2021. Since his diagnosis coincided with the COVID-19 pandemic, Ford had to face treatments alone in the hospital, without his family by his side.
“Having cancer is a challenge because you don’t know what is going to happen. A good diagnosis can turn bad and a bad diagnosis can end up good. Fortunately, my prayer life was good. I trusted in the plan of God, and I got through it,” Ford said.
Ford returned to the seminary in January 2021. Classes are typically held from August to early May, while the summer months are devoted to various ministries. Ford previously worked at a summer camp run by a Catholic Church on the Northshore. Last summer, he worked as a hospital chaplain in North Carolina for 10 weeks through the Clinical Pastoral Education program.
While all of his lessons have been important, Ford said the most personally impactful has been the subject of God’s grace.
“Grace is something God gives us to help us through difficult times,” Ford said. “When I was going through cancer, all I did was pray for strength and His grace. We learn through the teachings of the church that suffering does not have to be a bad thing.”
Ascension of Our Lord Catholic Church has also played an important role in Ford’s spiritual journey.
“My great grandparents were part of the founding members of that church. That has been the only church I’ve known for most of my life, and my family has been going there since its inception,” Ford said. “Most of the people who go there today have known me since I was being carried in my Mama’s arms. I know almost everyone there by name, and when I was growing up, church was always the most important thing.”