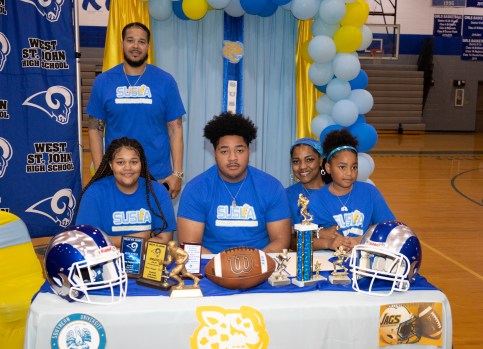 Jason August is surrounded by family as he commits to play football for Southern University Shreveport. 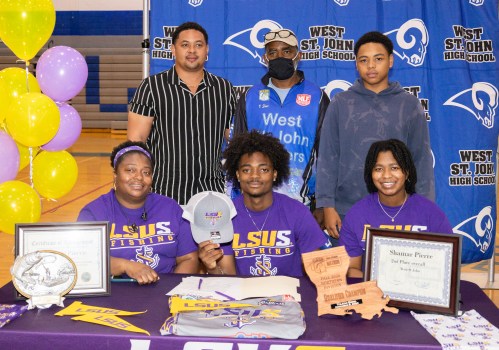 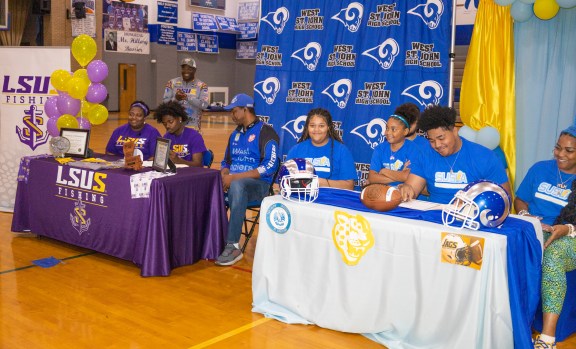 EDGARD — Jason August and Shamar Pierre will both be making St. John the Baptist Parish proud in Shreveport this fall.
August and Pierre signed letters of intent to pursue their respective sports at the collegiate level during a ceremony held May 20 inside the West St. John High School gymnasium. August committed to play football for Southern University Shreveport, while Pierre will join the fishing team at Louisiana State University Shreveport.
When it comes to football role models, August had to look no further than the two jerseys hanging in West St. John’s gym. He hopes to join the ranks of former NFL fullback Quinn Marcus Johnson and defensive lineman Tyson Jackson by one day having his jersey retired by his alma mater.
August’s football dreams were burning bright long before he stepped foot on West St. John’s campus. He fell in love with the sport at just 4 years old. While playing rec ball for the Westside Eagles, he knew in his heart that football would be a big part of his future.
August plans to study mechanical engineering at Southern University Shreveport. He sees junior college as a stepping stone to new opportunities.
“I hope to get some big time offers and really show my talent,” August said.
During his time at West St. John, August received numerous all-district and all-state accolades for his success on the Rams’ offensive and defensive line. He is the son of Chivan Hall and Jason August Sr.
Shamar Pierre, the son of Marvin and Shonda Pierre, has also made a splash at West St. John. He was an integral member of the school’s successful bass fishing team, which placed second overall in the state among hundreds of teams in April 2022.
As he committed to LSU Shreveport, Pierre was surrounded by plaques and certificates recognizing outstanding performances in bass fishing events. While Pierre has been on West St. John’s fishing team since eighth grade, his experience with fishing traces back to when he was 5 years old. His father was his first fishing buddy, and joining the high school team has allowed him to connect with other avid fishermen.
One of Pierre’s role models is his boat captain, Vernon Silver. Pierre said he is most looking forward to getting to fish again with his former teammate Khristian Rousseve, who committed to LSU Shreveport last year.