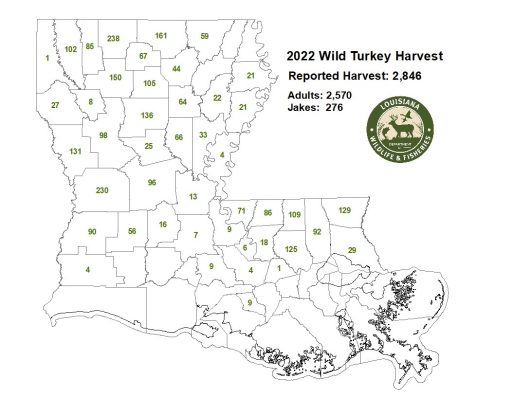 The 2022 Louisiana turkey harvest was the best since harvest reporting began in the state in 2009, the Louisiana Department of Wildlife and Fisheries announced, with hunters taking 2,846 birds compared to 1,886 in 2021, an improvement of 50.9 %.

The harvest is based on tag validation data, required by all turkey hunters.

In 2018, the opening of turkey season was moved later in an effort to potentially increase breeding and recruitment. This year is the first significant increase in reported harvest, according to the data, since then.

“Hopefully this increased level of harvest will be maintained or improved upon in future years,’’ said Cody Cedotal, LDWF’s Small Game Program Manager. “This would indicate increasing populations in many areas of the state and may provide evidence that the season change is working. Prime weather conditions the first three weekends of the season combined with relatively good reproduction in some areas of the state the last couple of years are likely contributing factors to the harvest increase.’’

The season began with good weather and an above average reported harvest during youth weekend and the first two weeks of the season. Even with some less than optimal hunting weather during the last two weeks, reported turkey harvests for those weeks increased slightly from previous years reports from the same time periods.

Season assessments received from hunters ranged from poor to very good. Many hunters indicated increased encounters with jakes, which is an indicator of moderate to good reproduction. Similar reports were noted in 2020 and 2021.

Forthcoming results from the 2021/2022 Louisiana Big and Small Game Harvest Survey will allow for a comparison of estimated harvest generated from that survey and an assessment of hunter-effort for the 2022 season.

“So far, results indicated by the reported harvest are extremely encouraging,’’ Cedotal said. “Even more encouraging is the overall dry weather experienced throughout April, potentially creating good nesting and brood rearing conditions. Hopefully this trend will continue through May and into June. Good quality habitat is also essential for long-term sustainability of turkey populations, so work with your local LDWF biologist and see if additional habitat enhancements can be made on your property.’’