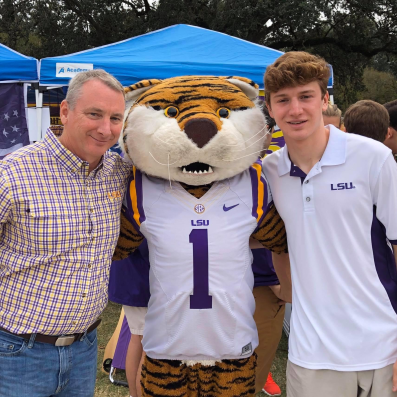 “My dad motivates me to become as great of a man as he is; I am very proud of the both of us for accomplishing the goals we had in place,” George said.

Bryan originally attended LSU in 1983 for his undergraduate studies. He then left the university in 1990 to join the U.S. Army serving as a helicopter flight engineer.

While serving in the Army, he attended Embry Riddle Aeronautical University, where he received his bachelor’s degree in aeronautical science.

“I had always been interested in pursuing my MBA but after completing my bachelor’s degree I decided to take the semester off; that semester turned into 20 years,” Bryan said.

He then went on to serve as a Blackhawk Helicopter Pilot for 30 years.

“By completing my degree at this stage of my life it will serve as an example to my sons that it is important to continuously challenge yourself and that it is never too late to learn something new,” Bryan said.

George plans to follow in his dad’s footsteps by continuing his education in the LSU Flores MBA Program. Along with his degree George will also be presented with an LSU Distinguished Communicator Medal at graduation.

“It means a lot to me that now we will have three generations of LSU Tigers in our family. It’s extra special that I get to share the experience with my son,” Bryan said.