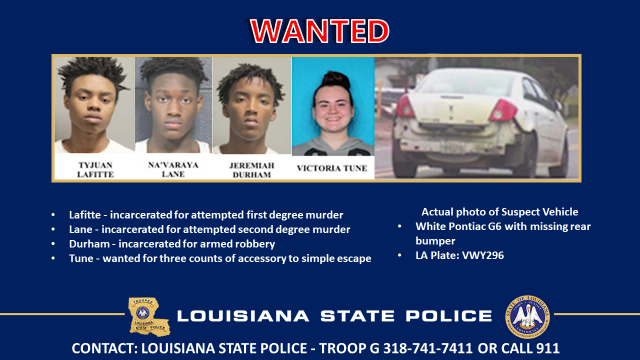 On May 14, 2022, just before 3:00 a.m., Lafitte, Durham, and Lane escaped from Ware Youth Center, with the help of Tune, an employee at Ware Youth Center.  They are believed to be in a white Pontiac G6, which is displaying Louisiana license plate VWY296 and has a missing rear bumper.

All four have ties to the Shreveport, Bossier, and DeSoto Parish areas.  Anyone with any information concerning the whereabouts of Durham, Lafitte, Lane, or Tune is asked to contact Louisiana State Police Troop G at 318-741-7411, 911, or their local law enforcement agency.  Durham, Lafitte, and Lane are all wanted for simple escape, and Tune is wanted for three counts of accessory to simple escape

The investigation remains active and ongoing.  No further information is available, at this time.