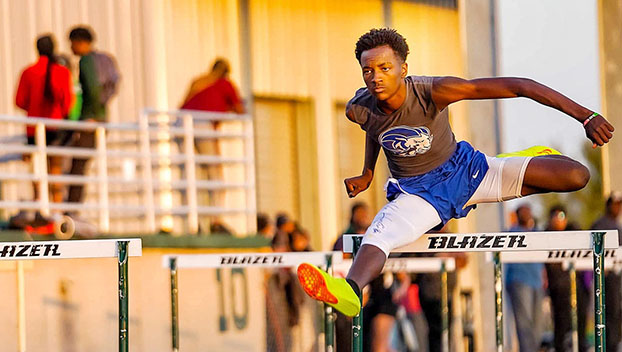 Ty'Jon Monroe is the back-to-back 1A State Champ in the 110m hurdles. Photo by Oliver Hooker, KoolCutz Photography

BATON ROUGE — Ty’Jon Monroe was in eighth grade when Coach Greg Johnson knew he had a future champion on his hands, as long as he could trust the process.

That vision came to life as Monroe stood on the podium after being named the back-to-back Class 1A state champion in the 110m hurdles during the LHSAA track and field state tournament in Baton Rouge.

It was the culmination of an unforgettable track season with several first-place finishes.

According to Johnson, Monroe truly came into his own over the past two years.

“It’s a special task to coach an individual like that. I’ve been coaching Ty’Jon since he was in the sixth grade, and it brings tears to my eyes to watch him run and see what he has accomplished this year and the previous year in track and field,” Johnson said. “It was a tough task when he was in eighth and ninth grade, but he believed in the process, and hard work pays off.”

Monroe plans to major in mechanical engineering while pursuing track and field in college. Johnson is confident that it is only a matter of time before a college or university pulls the trigger on a major offer.