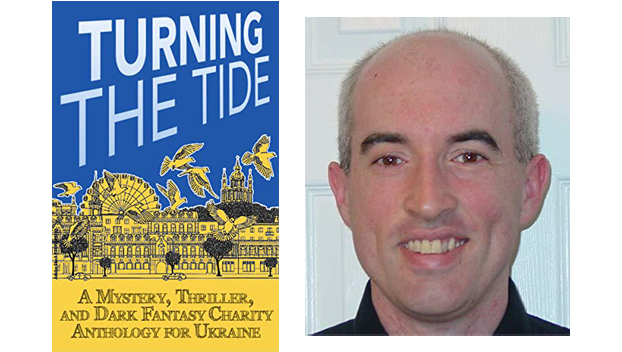 Paul Heingarten of Metairie, right, is one of the contributing authors featured in "“Turning the Tide: A Mystery, Thriller, and Dark Fantasy Charity Anthology for Ukraine.”

METAIRIE — Realizing the pen can be a powerful tool to invoke change across the world, thriller, mystery and fantasy authors from all walks of life have come together to write an anthology supporting relief efforts in war-torn Ukraine.

Paul Heingarten of Metairie is among the contributing authors of “Turning the Tide: A Mystery, Thriller, and Dark Fantasy Charity Anthology for Ukraine.”

All proceeds will be donated to charities supporting humanitarian aid causes in Ukraine.

“Once the limited anthology run is finished, all of the sales collected will be divided between the authors, and each author will have a choice among several charities,” Heingarten said.

Selected charities include The Harmony Fund (harmonyfund.org), which specializes in animal rescue; UNICEF USA (unicefusa.org), an organization helping children in crisis; MedShare (medshare.org), a nonprofit that strengthens healthcare systems; and Direct Relief (directrelief.org), which is committed to improving lives of people impacted by poverty and emergencies.

Heingarten feels most connected to Direct Relief, which has to date donated more than $12 million in grants to relief efforts in Ukraine since the country was invaded on February 24.

Best-selling thriller author Anthony M. Strong and his wife Sonya Sargent are launching the anthology. While the couple is now based in Florida, Heingarten befriended them through the Bayou Writers Club when they lived in Mandeville, Louisiana.

Heingarten has worked professionally in the IT field for nearly 20 years. In the past seven years, he’s turned his hobby and passion for writing into a business pursuit, opening doors for collaboration with authors around the country and across the world.

“When the situation in Ukraine happened, it was tough to look away from it. I’ve kept in touch with Tony and Sonya since they moved to Florida. They reached out with the idea that they were going to grab several authors, including some New York Times bestseller authors, to come together and do an anthology that would specifically be to raise money and send to charities helping people recover from the effects of the invasion,” Heingarten said. “As writers, especially with some in our group being bestselling authors and having a large platform, we came to the decision that we can do something to help.”

Heingarten’s contribution to “Turning the Tide” is a thriller with some paranormal suspense. Set in New Orleans, the story can be considered Heingarten’s version of a Twilight Zone episode with the added interest of local landmarks and lore.

“I know times are tough right now. We are still deep into pandemic and people are really struggling, but I think it’s a good thing to reach out to people who are really having to go through a horrific thing and show them a little compassion and hope. I think it can do some good for part of the world that really needs it,” Heingarten said.

The anthology is available for pre-order now at https://weststreetpublishing.com/anthology/ and all major retailers for $4.99. It will be published on May 31, 2022 and available for a limited time.