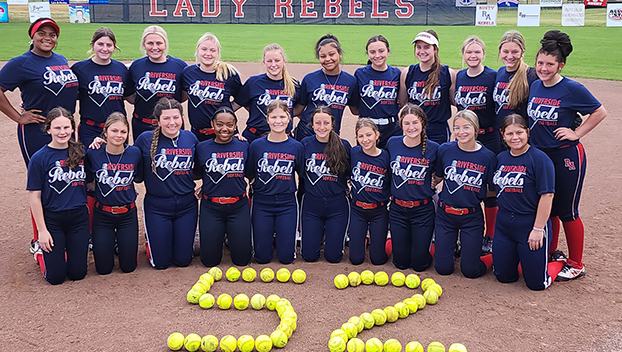 The Riverside Academy softball team celebrates a record-breaking 52 home runs for the 2022 season. They currently have 53 home runs and counting.

RESERVE — The Riverside Academy softball team fights tooth and nail until the last inning. That competitive mindset has allowed the Lady Rebels to sail into the Division IV quarterfinals, shattering records and surpassing expectations along the way.

Ranked No. 3, Riverside Academy defeated No. 14 Ouachita Christian 14-4 during the regional round of the playoffs on Tuesday evening.

Junior Lea St. Pierre went two for three and had the final RBI to seal the regional victory. Sophomore Amber Palermo earned the win at the mound, striking out four. It was her first experience pitching in the playoffs, and Regalo said she has truly stepped up to the challenge.

The Lady Rebels had come to rely on Emily Vicknair’s pitching skills prior to an injury.

“Emily went down with surgery in November, and she’s still out. We have Alainah and Ava, but we also have young sophomores who didn’t get to throw a lot last year,” Regalo said. “Amber got the jitters out and threw well.”

The Lady Rebels have been very young in recent years. The middle schoolers and freshmen who made their mark on the field in previous seasons now comprise a stacked sophomore and junior presence in the lineup.

Earlier this month, the girls exceeded expectations when they shattered a home run record set in 2017.

As of this week, the Lady Rebels have 53 home runs and counting for this season. Camryn Loving and Alainah Felton have each knocked 14 homers, followed by Corrin Cashio and Alonah Felton with eight each. Ava Fernandez has hit seven home runs, and Chloe St. Pierre and Amber Palermo have one each.

Regalo said it’s been rewarding to watch the girls meet the goals they set for themselves at the beginning of the season.

“I definitely didn’t think I would have another team that would come close or beat the group that had 49 home runs one year and then the next year hit 51. As a coach, you don’t know if you’ll ever have that again. This group has surpassed some of our expectations, and it’s great to watch,” Regalo said. “To be able to break that record was huge for them. That was their goal this year. They knew that Coach Watson was one of the record holders. She’s helping us this year, and it was a running joke of them telling her they are coming to get her record. It was great for her to see, too.”

Riverside Academy now has a 28-6 season record. The Lady Rebels will host No. 6 Cedar Creek in the Division IV quarterfinals at 5 p.m. Friday, April 22.

“I think they have a very seasoned team that knows what it’s like to go deep in the playoffs every year. It will be a very good game to watch,” Regalo said. “From what I’ve seen this year, they’ve done a good job hitting and pitching. I’m anticipating them to be one of the top teams in the state.”

She invites the community to pack the stands and cheer the Lady Rebels on to victory.

“We had a big crowd this last game, and I think it put them in the right mindset. It’s nice to see the community support for the girls,” Regalo said.