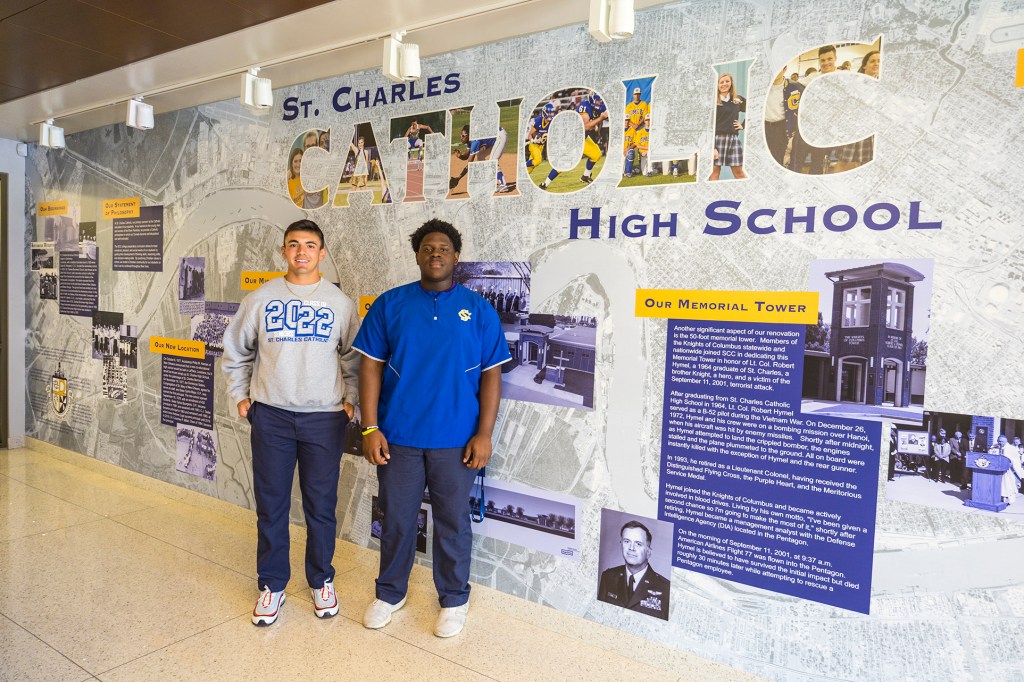 LAPLACE — With ambitions to open a physical therapy clinic together in the future, St. Charles Catholic’s Zack Vicknair and Eric Cador are embarking on separate athletic journeys at the collegiate level.

Vicknair recently committed to playing football at Southeastern Louisiana University, while Cador will continue his baseball career with Alabama A&M. Both young men are multi-sport student athletes and members of the 2021 state championship football team.

Vicknair initially eyed Davidson College in North Carolina as his college decision. He made the choice to stay closer to home after receiving full academic scholarship offers from Southeastern and Nicholls.

Southeastern was his final choice because the campus and surrounding town reminded him the most of home.

Vicknair is eager to join the Lions as a preferred walk-on. As a five-year member of the Comets football team, Vicknair has experience playing quarterback, running back and safety. He appeared in three consecutive state championships against Lafayette Christian, where the third time proved to be the charm for the battle-tested Comets.

Finally taking home the state title was the highlight of his senior season, of course, but equally unforgettable was the day the team returned to practice post-Hurricane Ida.

We were all texting in a group chat. Some people were saying they might not even come back to Louisiana, much less to school,” Vicknair said. “It was scary coming back and not knowing who was going to be there. We came out, and the energy was crazy. Everyone was so excited because we knew we had something special that day. We were just happy we got to play football.”

Vicknair brought a quiet leadership to St. Charles Catholic, and he plans to continue leading by example at Southeastern.

“I don’t do all of that hoopin’ and hollerin’. That’s just not me. I’m not very vocal on the field, but I try to lead by my actions,” Vicknair said.

Vicknair learned to be true to himself at St. Charles Catholic, especially through the Fellowship of Christian Athletes. He avoided the group as an eighth grader, worried it wouldn’t be viewed as “cool” by his peers. When he finally attended a meeting at a teacher’s request in ninth grade, the experience was life-changing, and he has become one of the biggest proponents of FCA.

No matter where his journey leads him, Vicknair will continue to strive for excellence in academics. He already has several college credits under his belt thanks to dual enrollment and advanced placement classes, and he’ll graduate from SCC with a GPA above a 4.0.

His parents, Kirt and Lisa Vicknair, have always put an emphasis on education.

“My mom and dad both say that at some point, football is going to end. I could get in a car accident tomorrow and break my leg. Your brain and what you learn is going to carry you way farther than sports can. If I can set myself up with a good education and a good degree, once football is over, I’ll be doing just fine,” Vicknair said.

Vicknair and Cador see kinesiology as an extension of their passion for sports. They plan to help young athletes recover from injury and find their way back to the field by opening a clinic called “EZ Recovery,” short for “Eric and Zack.”

Cador will obtain his undergraduate degree at Alabama A&M, the first school that gave him a chance to pursue his dreams in college baseball.

Now 17, Cador has called the baseball diamond home since he was 5 years old. However, his journey to a college scholarship wasn’t typical. He was never the fastest guy on the Comets baseball team or one to steal a lot of bases, but his talent shined with a bat in his hands. Cador put together videos highlighting his ability as a power slugger and enlisted his uncle’s help with reaching out to colleges.

“My great uncle coached at Southern University for many years, and he has a lot of contacts for baseball. I sent him the videos, and I asked him not to use my last name to try to get me somewhere,” Cador said. “He told me there’s no doubt I could go somewhere. He said, ‘Your last name is not what’s going to make you. The power that you have swinging the bat is what will separate you.’”

The coach at Alabama A&M took an interest in a video of Cador swinging the bat inside a cage. Soon, he followed up with a scholarship offer. Southern University also took an interest in Cador, offering him preferred walk-on status, but he opted to go with the school that gave him the best opportunity.

Cador’s is motivated to be the best person he can be, and he understands the importance of learning from his past to shape his future.

Cador is a member of the Fellowship of Christian Athletes and part of the senior leadership on the Retreat Team at St. Charles Catholic. He is the son of Stacey and Tim Cador.