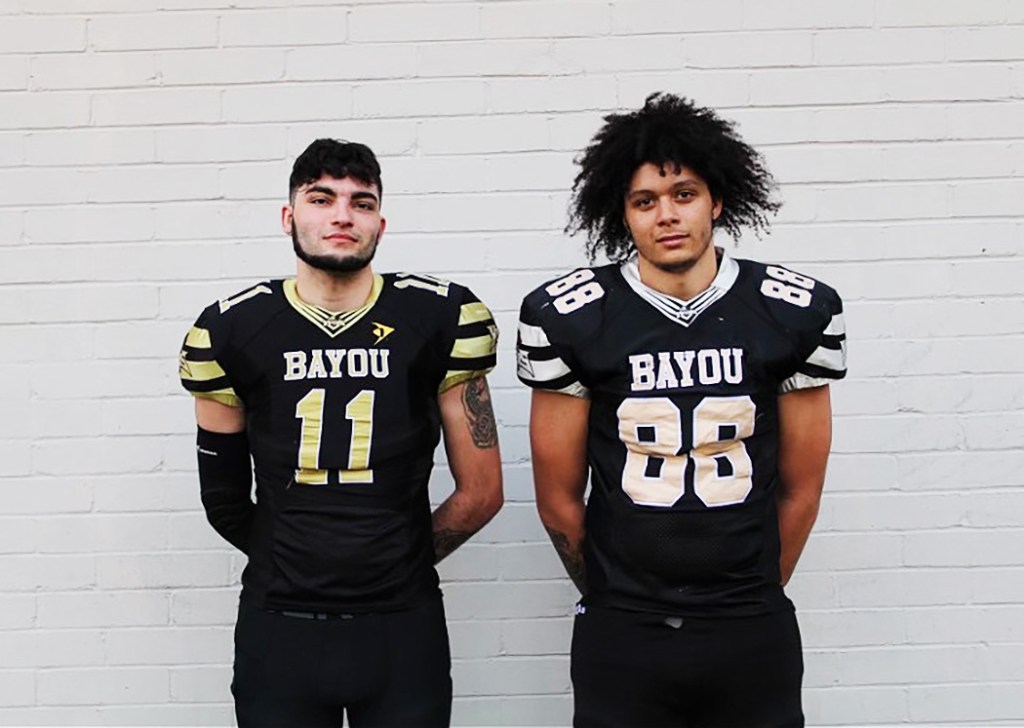 Cullen Nazio and Jacoby Celestine are members of the Bayou Vipers, a semi-professional football team based in Hammond.

HAMMOND — Two former high school athletes in the River Parishes have found their way back to the football field with the Bayou Vipers, one of the most successful developmental football teams in Louisiana.

Based in Hammond, the Bayou Vipers are a member of the Gridiron Developmental Football League, which uses the franchise model and follows a playoff format similar to the NCAA. Coach Ron McCaleb has opened his arms to athletes ages 18 and up who are looking to better themselves on and off the field.

Jacoby Celestine grew up with the game of football. A member of Hahnville’s Class of 2021, he was highlighted by the 2020 Louisiana Football Magazine as a second team All-South selection for defensive end.

“I was planning on going to college to play football, but I didn’t have any big offers, so I started working instead,” Celestine said.

Through work, Celestine met a former arena ball player who reignited his desire to chase his football dreams.

“He told me about the Bayou Vipers and had the coach give me a call. I decided to go out to play so I could get back on the field again,” Celestine said. “My goals are to make the playoffs, win the championship, get on a good track and keep going for the next few years. I’m excited to meet new people and also get back on the field and be able to play football again.”

Celestine is already proving to be an asset to the Bayou Vipers. He’s smart on the field, and opponents tend to underestimate his strength. While he primarily plays on the defensive line, he is versatile and can perform in various positions.

Cullen Nazio is another local athlete new to the Bayou Vipers this year. A former member of the Thibodaux High School football team, Nazio grew up in Lafourche Parish and moved to St. Charles Parish to live with his father after graduating in 2019.

He played receiver and linebacker in high school, and one of the highlights of his career was recording several tackles against Terrebonne quarterback Ja’Khi Douglas, who went on to play for the Florida Seminoles.

Nazio’s passion for football started at Sixth Ward Middle School. The sport has a way of calming him no matter what hardships he faces, and joining the Bayou Vipers feels like a new beginning.
“It’s an opportunity to start over. I’ve had some rough things going on, and football just eases it all up. I can make a new family with the team. It will give me an opportunity to hopefully take it a step further,” Nazio said.

Nazio enjoys having the opportunity to travel with the Vipers. One day, he hopes to take his game to the next level by signing with an overseas franchise. For now, his goal is to improve himself each day.

“The biggest thing now is adapting from high school to where we are playing now. We’re with bigger guys who have been playing for longer,” Nazio said. “The main change is the speed of the game and having 15-minute quarters.”

Five games into the 2022 season, the Bayou Vipers are positioned third in the Bayou South Division with three losses and two ties.

“We are in a little slump right now, but we are going to come back. We started off the season slow and with a lot of injuries,” Nazio said.

Coach McCaleb has watched the minor league field set the stage for some major success stories.

The Bayou Vipers stepped into this season with 175 victories and 75 losses under Coach McCaleb.

With District Championship in hand, Lady Comets plan to…