Rinse and repeat: Southern US to face more volatile weather 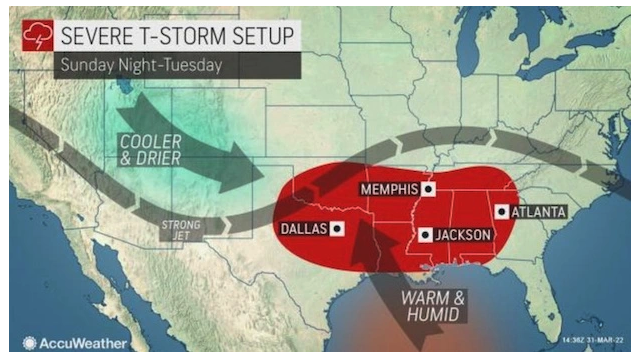 AccuWeather meteorologists expect April to follow in March’s footsteps as the table is set for another round of severe thunderstorms, including possible tornadoes, across the South next week. The tornado risk may be accompanied by a heightened flash flood danger.

The initial area of concern for severe weather in the first few days of the week will be focused on portions of Oklahoma, Texas, Arkansas and Louisiana. In these areas, when compared to the recent outbreaks, the hazardous weather may be slower to evolve and spread eastward Sunday night into Monday night.

As the storm moves eastward, portions of the Southeast and Gulf Coast could all be at risk for severe thunderstorms during Tuesday and even Wednesday of next week, depending on the exact speed of the storm. Portions of Tennessee, Mississippi, Alabama, Georgia and the Florida Panhandle could all face volatile weather these days.

Some of the areas that could be threatened by next week’s severe weather have already been hit hard by the destructive thunderstorms and tornadoes so far this spring.

AccuWeather meteorologists say another hazard may emerge in the pattern next week regardless of the extent of severe thunderstorms — persistent downpours that heighten the risk of flash flooding.

Some parts of the South could use a thorough soaking, but the rain may come down at too quick of a pace for the ground to keep up.