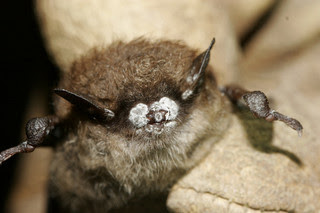 A fungus that causes White-nose Syndrome in bats has been detected in Louisiana, the Louisiana Department of Wildlife and Fisheries (LDWF) announced.

Under certain environmental conditions the fungus can be deadly to bats.

Pseudogymnoascus destructans (Pd), the fungus that causes white-nose syndrome (WNS) in bats, was detected in Louisiana for the first time in samples collected from Brazilian free-tailed bats in Natchitoches Parish during surveillance sampling in 2021. The disease is not contagious to humans or other animals.

White-nose syndrome was first detected near Albany, New York, in Feb. 2006. Since initial detection, the disease has resulted in the deaths of more than 6 million bats in North America. WNS has been found 37 states and seven Canadian provinces.

Hibernating bats are susceptible to infection by the fungus during hibernation, when body temperature decreases. The cold-loving fungus invades their skin, leading to dehydration and starvation along with other signs of illness.

Infected bats may awaken from hibernation more frequently and exhibit unusual behaviors such as flying outside during the day or clustering at hibernating openings. The increased activity levels reduce or completely deplete fat reserves critical for hibernation, resulting in death.

LDWF monitors known bat hibernation and roost locations to conduct annual Pd and WNS surveillance. The samples from Natchitoches Parish were collected as part of routine monitoring. No evidence of the disease WNS has been observed in the state.

State wildlife officials are closely monitoring WNS and susceptible bat colonies throughout the state as part of their ongoing work to conserve vulnerable species.

For more information contact Nikki Anderson at 225-765-5030 or nanderson@wlf.la.gov or visit https://www.whitenosesyndrome.org/.

Laplace man sentenced for conspiring to distribute drugs from…