Texas suspect in double homicide nabbed in Louisiana after manhunt 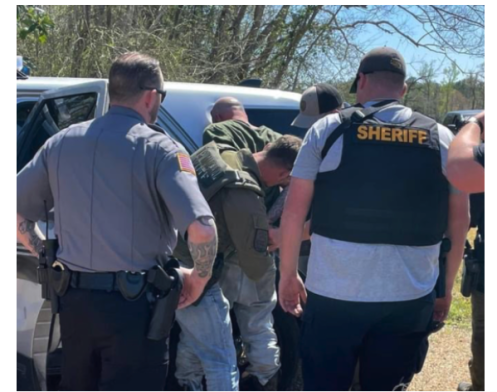 A man wanted in connection with a double homicide in Texas was arrested Friday afternoon in Beauregard Parish.

Charles Spraberry was arrested just outside of DeRidder, in the vicinity of Charles Duttry Road, bringing an end to an intense overnight manhunt.

Sheriff Mark Herford said deputies located Spraberry after setting up a perimeter around the area and then intercepting him as he attempted to cross US 171.

“I’m very proud of the work my deputies did and that we were able to resolve this situation in the best way possible. I’m incredibly grateful for all the assistance we received from other agencies who volunteered to help us,” Herford stated.

The hunt for Spraberry began Thursday evening after authorities located a vehicle in the area that was reportedly stolen by Spraberry out of Texarkana, Texas.

Sheriff Mark Herford said deputies were then able to hone in on Spraberry’s location and establish a perimeter around that area.

During the manhunt, residents in the area had been kept on high alert, with deputies advising them to secure their outside buildings that could be used for hiding.

Spraberry will remain in BPSO custody while awaiting extradition to Texas.

Authorities there said two bodies were found in a burned trailer and are believed to have been shot before the home was burned.