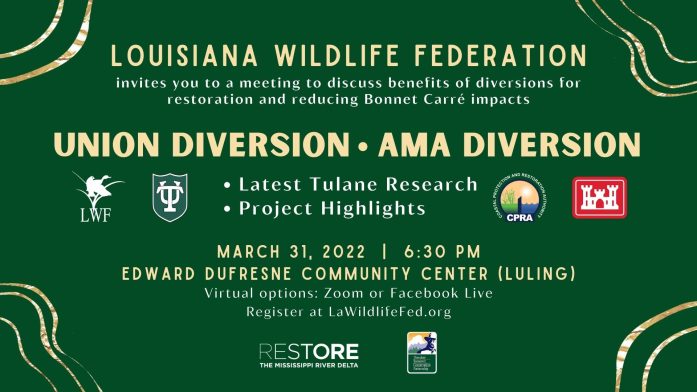 Baton Rouge, LA, March 22, 2022 – Louisiana Wildlife Federation is hosting a meeting for the public to learn about the multiple benefits of diversions to restore wetlands and reduce impacts of Bonnet Carré Spillway openings. The meeting will be held March 31, 2022 at 6:30 p.m. at the Edward Dufresne Community Center in Luling.

The meeting will feature presentations by the Coastal Protection and Restoration Authority and Tulane University. Ehab Meselhe, Ph.D., Tulane scientist leading the study, will discuss results of this research, which evaluates impacts of river diversions on water flows through the Bonnet Carré Spillway for flood control. Representatives from the U.S. Army Corps of Engineers will also be present to answer any questions.

The meeting will be in person but there will also be virtual options to join via Zoom or Facebook live. Attending on Zoom will require registration. More details about the meeting, including how to attend virtually, can be found at lawildlifefed.org.

The Bonnet Carré Spillway (BCS) is a flood-control structure and part of an overall flood control system for the Lower Mississippi River managed by the U.S. Army Corps of Engineers (USACE).  Recently, the BCS has been operated more often than it has been in previous decades. The BCS diverts fresh floodwaters from the Mississippi River (along with sediment and nutrient loads) into Lake Pontchartrain.

Environmental Defense Fund (EDF) and Tulane University led a study to examine the utility of three river diversions identified and defined in the 2017 Coastal Master Plan —Maurepas, Union, and Ama — to function as auxiliary flood control options with a goal of reducing the magnitude or duration of operating the Bonnet Carré Spillway.

The Union Diversion would divert freshwater into West Maurepas swamp near Burnside to provide sediment for emergent marsh creation and freshwater and fine sediment to sustain existing wetlands.

The Ama Diversion is a conceptual sediment diversion into Upper Barataria near Ama to provide sediment for emergent marsh creation and freshwater to sustain existing wetlands.

Both the Union and Ama diversion are in the State’s 2017 Coastal Master Plan. The Union Diversion is currently included in the Coastal Protection & Restoration Authority’s Fiscal Year 2023 Annual Plan; in this plan, funding is allocated for the planning phase of the project. The Ama Diversion, however, is still in the conceptual phase (it has not moved to the planning phase yet).

The River Reintroduction into Maurepas Swamp, which is also mentioned in Tulane’s study – is expected to begin construction this year. The project is expected to maintain over 45,000 acres over 50 years.

These three diversions – if operated jointly – show opportunities not only for restoration of degraded habitat but also to reduce flooding and the associated impacts of opening the Bonnet Carré Spillway.

Other photos and high resolution photos can be requested by emailing lwf@lawildlifefed.org