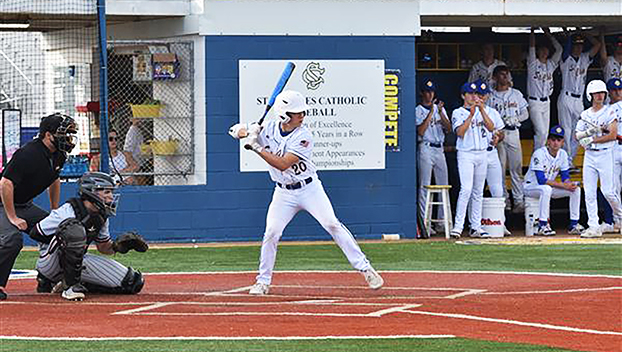 Jackson Monica had a big weekend at bat for the St. Charles Catholic Comets. Photo from stcharlescatholic.org.

Ian Arnett was the winning pitcher, striking out one and allowing five hits and three runs over five and a half innings. Michael Hotard stepped up to the mound for relief and recorded three outs.

St. Charles Catholic came back after Ruston took an early lead on a home run. The Comets answered with a single from Ryan Laiche before running away with the lead in the third inning.

Laiche, Arnett and Jackson Monica were hot at the bat, totaling eight hits for the Comets.

On Friday, the Comets celebrated sweeping victories in doubleheader wins over Weston and Central Baton Rouge.

Brady St. Pierre threw a shutout, striking out six during game two on Friday as St. Charles Catholic defeated Central Baton Rouge 2-0. St. Pierre did not surrender a single run over seven innings on the mound.

Britten Dean, Monica, Kade Edmonds, Authement and Laiche each contributed one run to lead the Comets to the win.

The Comets improved their record to 12-6 on the season. St. Charles Catholic will be back in action  Tuesday, hosting Holy Cross.

The St. Charles Catholic softball team also had a great week highlighted by a hard-fought 6-5 victory over St. James Saturday afternoon. Kamryn Cancienne earned the win at the pitcher’s mound with eight strikeouts and a staggering 27 first pitch strikes across nine innings.

Mia Ganote led at bat with four hits against St. James, followed by Hannah Brady and Adrienne Arnett with two hits each.

With this weekend’s win, the Lady Comets improved their season record to 15-3.