Birds and bees are up to their springtime antics 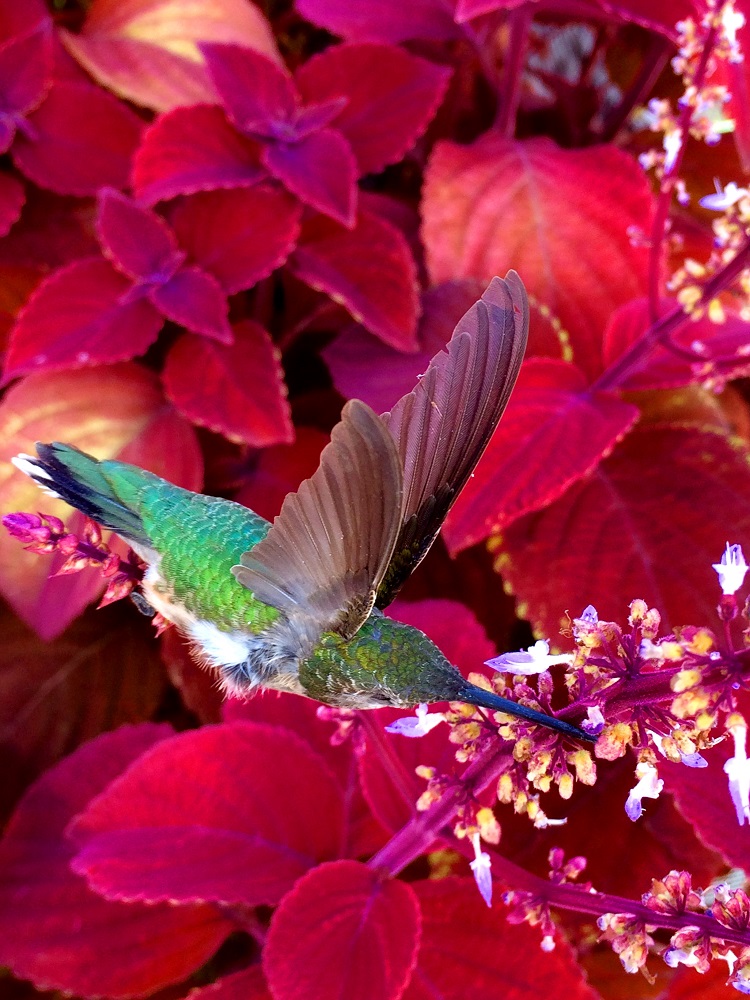 The birds and the bees are up to their springtime antics, bringing meanings more important than mere beauty to the garden.

Clovers, dandelion, henbit, lyre-leaf salvias and other little meadow wildflowers in neighbors’ lawns are dripping with pollinators and their predators, all eager for spring feasts. Here’s hoping as many folks as possible will get on the “flower lawn” bandwagon and leave a few patches here and there as they start mowing for the season.

I surprised a robin putting the finishing touches on her nest in my vine arbor, and watched a redheaded woodpecker round out a nesting cavity in a half-dead tree. And my nature-heart broke the other day as I listened to a forlorn female cardinal singing her heart out trying to catch the attention of a brilliant red male; the territorial male was too busy bashing his beak on his own reflection in my garden mirror to notice his suitor was getting impatient.

I enjoy mirrors in my garden partly because they double the impact of my flowers while making the little space seem so much larger and colorful, and partly for the bird drama. But I learned a long time ago to hang crape myrtle branches upside down a foot or so away from the sky-reflecting surfaces, so birds don’t mistake them for flyways. And it provides perches for self-absorbed head-bangers.

To me, one of late winter’s biggest thrills, more even than azaleas and dogwoods, is seeing the plump flower buds starting open on my backyard buckeye tree, which told me that I’ll soon see newly-arriving hummingbirds. Happens every year. And no, it turns out the hummingbirds don’t actually arrive on the backs of migrating geese. Heard that a long time ago, and pretty sure it isn’t true.

Hummers and buckeyes go hand-in-glove, with the tiny birds timing their arrival to follow the flowering of native woodland trees, shrubs, and vines starting on the coast and on up to Tennessee and eventually New England. They go mostly for plants with showy, nectar-rich flowers, including red-flowered buckeye, yellow Carolina jessamine (which most folks call yellow jasmine), deep pink redbud, and native “wild honeysuckle” which is actually a deciduous azalea that flowers in pink, white, yellow, and gold.

Lots of folks put up hummingbird feeders starting about now, and keep them filled with sugar water to keep the birds’ energy levels up. The usual ratio is one part sugar to five parts water (which does NOT have to be boiled); store the extra in the fridge for a couple of weeks. Always use white sugar, never powdered sugar, brown sugar, honey, corn syrup or anything else. Keep the feeder in a shaded spot to slow down the growth of mold or bacteria, and try to change the solution every few days.

My favorite everblooming summer flowers for hummingbirds and butterflies include salvias, basil, coleus, lantana, single-flowered zinnias, and the long-blooming shrub named Abelia. There are many others but these give months of color and nectar.

The little birds also need protein, which they get from tiny spiders and insects, which means those gardens with lots of different plants will have more to offer hungry wildlife. I leave spider webs up for hummingbirds to use as nesting material; hummers often steal trapped insects from them as well.

Soon my cross vine will burst into bloom, along with woodland perennial Indian pinks (Spigelia), and then a succession of others that ensure my garden always has something to offer wildlife. Hopefully it’ll continue to tempt some more of the little migratory birds to stick around my garden for the summer.