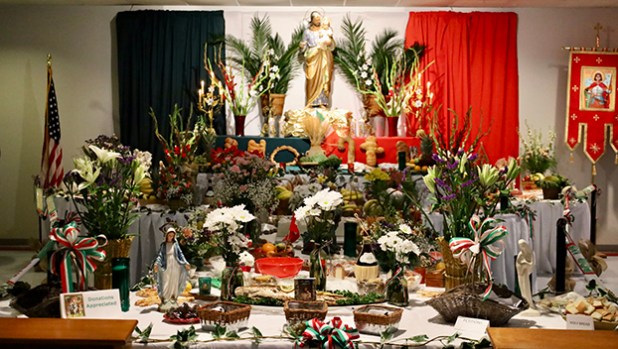 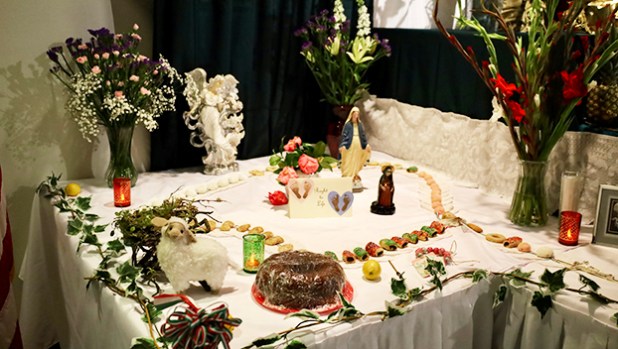 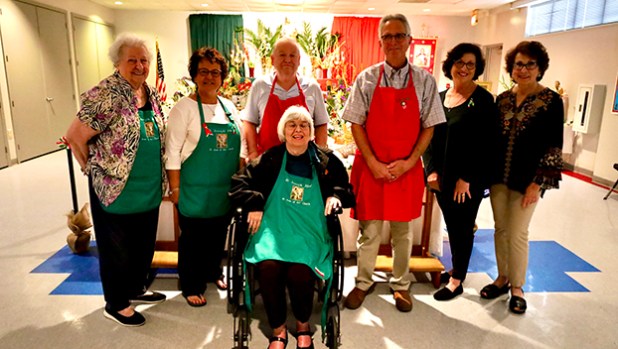 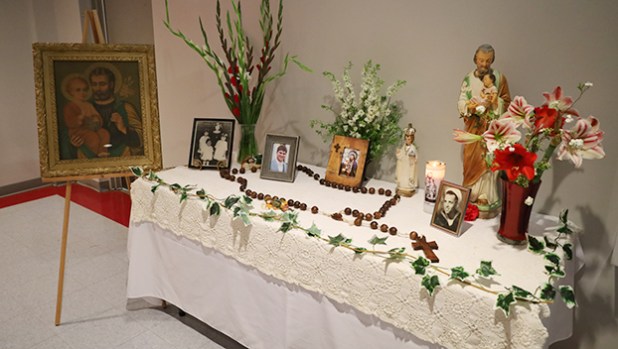 LAPLACE — Parishioners of St. Joan of Arc Catholic Church poured heart and soul into every little detail of this year’s St. Joseph’s Altar, creating a beautiful display that upholds a deep-rooted Sicilian tradition.

Fr. David Ducote blessed the St. Joseph’s Altar this morning as students learned about the history it represents. The altar is available to the public for viewing until 6 p.m. today, from 9 a.m. to 7 p.m. Saturday, March 19, and from 10 a.m. to 7 p.m. on Sunday, March 20 at 529 W. Fifth Street in LaPlace.

While viewing is free to the public, donations are being collected to support various missions around the world. Volunteer Len Arcuri said funds for the missions have also been collected through St. Joseph’s Altar cookie sales.

“As a church parish, we’ve been baking cookies since January 9. We’ve taken orders for 1,100 pounds of cookies,” Arcuri said.

Cookies are found throughout the St. Joseph’s Altar, with some pieced together in the shape of a rosary around a right to life display. Every piece of food delicately placed on the altar has a special meaning, from the modica breadcrumb mixture that represents St. Joseph’s work as a carpenter to the fava beans that symbolize good fortune.

The St. Joseph’s Altar tradition originated in Sicily when a drought seized the island, killing crops and greatly limiting the food supply. As livestock began to die, the people of Sicily prayed to St. Joseph to bring rain. With a lot of prayer, St. Joseph interceded on their behalf and ended the drought. In return, the Sicilians created the first St. Joseph’s Altar, offering the food that grew from answered prayers.

Fava beans became a lucky symbol for the much-needed sustenance they provided during difficult times.

The tradition was carried over to New Orleans with the immigration of Sicilians to the region in the 1800s. A renewed interest in the St. Joseph’s Altars was seen during World War II.

“When a lot of sons went off to the military, parents would make a pledge that if their sons returned from war safely, they would build an altar in honor of St. Joseph,” Arcuri said. “It’s

carried on throughout the years. Now a lot of church parishes and schools will build an altar.”

The tradition came to St. Joan of Arc 10 years ago, when Bobby and Marlene Bourgeois shared their strong dedication to St. Joseph. The altar, as well as the cookie sales, have grown over the years with interest from the community.

Arcuri said all of the food on the altar is meatless because St. Joseph’s Feast Day always falls during Lent.

Vegetables and fish are included in abundance. Near the back of the altar are pieces of bread fashioned into a ladder, a crown of thorns, a shepherd’s staff, a cross and other religious symbols. The altar also features bread twisted into the shape of a hammer and nails to represent St. Joseph’s work as a carpenter.

Once viewing has ended and the altar is taken down, volunteers assemble food boxes to distribute to needy families in the surrounding area.

Sheila Oubre is among the volunteers who assembled this year’s St. Joseph’s Altar.

“It’s a really dedicated group of people who give up their time and energy to do this. When I was working, I always said that when I retire, I was going to come help make cookies. I retired five years ago and started helping. It’s given me a lot of contentment and joy,” Oubre said.

The altar brings a sense of peace to those who come before it to ask for St. Joseph’s intercession. Visitors are invited to say a prayer and write a petition at the front of the altar. After it closes, the petitions will be carried over to the church.

The St. Joseph’s Altar at St. Joan of Arc also features a table with photos of deceased loved ones, including Oubre’s husband, who passed away two years ago. Another photo on the table shows four sisters who grew up in Garyville and were known for assembling a St. Joseph’s Altar each year.