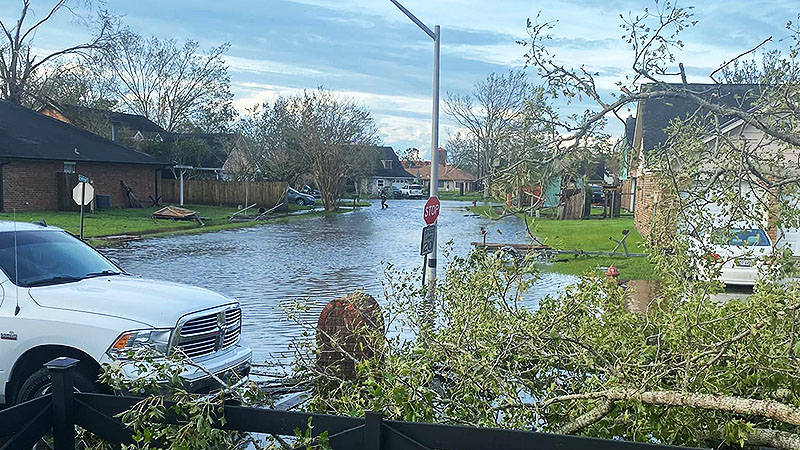 A flooded street is pictured during the aftermath of Hurricane Ida, which struck the River Parishes on Aug. 29.

LULING — Flood insurance policies renewing on or after April 1, 2022 will be subject to the new Risk Rating 2.0 methodology and will likely spell higher rates for a majority of homeowners in the River Parishes.

During a town hall earlier this month, St. Charles Parish President Matt Jewell said this isn’t the first time residents have fought against skyrocketing rates. When the community protested the Biggert-Waters Flood Insurance Reform Act 10 years ago, many turned in keys to their homes to symbolize how higher rates would make the region unaffordable.

The same questions loom overhead with the rollout of Risk Rating 2.0: Will families be able to afford flood insurance, or will they be forced to leave?

Phase one of Risk Rating 2.0 began in October 2021, with new policies subject to the new rating methodology. Phase Two begins in April 2022 as renewals on existing policies shift to the new system.

“What we are seeing on the ground is skyrocketing rates. While they aren’t the $20,000 that we were seeing under Biggert-Waters, they are $5,000, $7,000, $9,000, $10,000, with no indication of what a maximum policy can be,” Jewell said. “It was rolled out without town hall meetings or public input that we have seen, and we agree that these flood insurance rates that we are seeing are unreasonable and are going to kill our community.”

Gilbert Giron, regional flood insurance liaison for FEMA, was on hand to answer questions during this month’s town hall meeting in Luling.

According to Giron, the old system was based around the National Flood Act of 1968. Since the 1970s, flood zone and elevation have been used to determine rates, and riverine or storm surge flooding were the only perils associated with flood insurance policies.

Under Risk Rating 2.0, insurance premiums can be impacted by up to six perils. Since one of those perils involve the Great Lakes, up to five perils can affect policies in Louisiana.

“Under the old system, you could see the levee discount. Under risk rating 2.0, you will still receive a discount for levees, but you may still receive an increase because of additional flood perils in your area,” Giron said.

Risk Rating 2.0 also takes into account the characteristics of a home, including foundation type, number of claims and replacement cost value. Under this rating system, neighbors may have drastically different rates depending on the value of the home.

“For past 54 years, have been using methodology from the 1970s. Risk Rating 2.0 brings it in line with modern technology and insurance industry best practices,” Giron said.

Residents will see a transition in rates not necessarily in April, but when it comes time for their policy to renew. According to Giron, 20% of homes across Louisiana will see an immediate decrease in costs under Risk Rating 2.0. This is more likely to apply to homes of lesser value.

Policies have the potential to increase up to 18% per year.

FEMA has stated that the new system will “more accurately reflect flood risk and ensure the National Flood Insurance Program will be here for this generation and generations to come.”

Giron added that the legacy program was no longer sustainable.

“It was supposed to be a self-sustaining program…We are now $20.5 billion in debt. We have paid out for the past six years consecutively $1.2 billion,” Giron said, noting that 33% of claims have come from Flood Zone X, which is supposed to have a minimal flood risk.

“We had to implement changes in the way we collect flood insurance premiums,” he said.

Jewell said the new rating system is a slap in the face to residents who voted years ago to tax themselves on levee protection, pump stations and flood gates.

While looking at the St. Charles Parish levee alignments in the National Flood Protection database, Jewell noticed that the website incorrectly identified the height of the existing levees, with some listed as “zero feet high.”

“Is that what they are using to judge our flood risk?” Jewell asked.

“Dating back to May of last year, we began having conversations with FEMA telling them this is a flawed strategy. We have seen rates going from $560 a year to $6,000, $7,000 in St. Charles, Lafourche and other areas,” Graves said.

With the new rating system moving forward and making flood insurance unaffordable for many families, Graves said investments in hurricane protection and coastal restoration will be needed more than ever.

For more information on Risk Rating 2.0, including spreadsheets breaking down the number of policies seeing cost increases by zip code, visit www.fema.gov/flood-insurance/risk-rating.