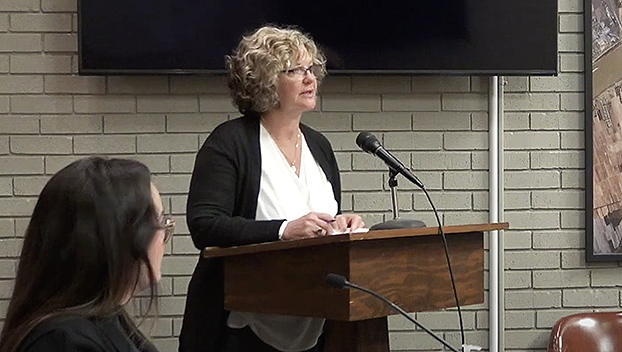 RESERVE — A planned library in Reserve promising stunning vistas of the Mississippi River, meeting rooms and a quiet area to simply sit down and read one of the thousands of books at arm’s length made a pivotal leap this past Tuesday night at the St. John the Baptist Parish Council meeting in Edgard.

Three resolutions adopted by council members represented critical progress in bringing the library from the drawing board to a shovel in the ground.

The council first approved a resolution to declare two houses on the parish-owned property where the library is scheduled to be built as surplus and followed with a resolution authorizing the sale of the houses. The authorization to sell the structures included the stipulation that the buyer remove them from the property, according to library officials.

Library director Andrea Tullos said she was awaiting appraisals for the two houses and noted the appraisals will be limited to the structures since no property is attached.

She added she has an estimated cost on demolition of the houses but added that is not the route the Library wants to take.

Equally as meaningful as the first two resolutions, the council also authorized that the millage dedicated to the library be used for construction. Tullos said that dedicated millage is limited in scope, to be determined by the library system. Also, those funds can only be released through council approval.

Tullos said the funding is on hand to cover the costs of the $9 million library. Questions have arisen in the past about rededicating some of those library funds to other parish areas but Tullos reiterated those funds are dedicated to the library system.

The purchase of the property, which sits adjacent to the St. John Theatre, was finalized in December 2020.

Tullos shared renderings of the proposed facility with council members, explaining the library will include amenities such as a cafe and meeting rooms.

The historic “1885 house,” which currently sits at the rear of the property, will be moved to the front. Tullos said the brick and picket fence will be restored to reflect its original 1885 appearances and will tie into the library structure.

She said the house will also include a second floor walkout that “can be utilized for seating, reading or hanging out.”

The sprawling live oak trees on the property will also be saved.

“They will be a big part of the design process,” Tullos said. “There will be a clear vision to the river and interior rooms for materials, computers and a multi-purpose room.”

The property will also feature a test kitchen.

She also addressed parking, which is the defining reason why the library is moving from its former Reserve location. Tullos said parking will be located in front and on the side of the building.