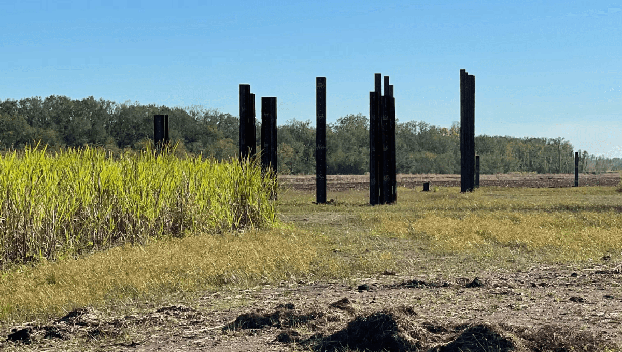 WALLACE – The Descendants Project, the local nonprofit organization suing the parish over the zoning of the Greenfield grain elevator site as heavy industrial, amended its lawsuit to include a 2006 re-subdivision map of the property that shows the land as residential.

According to The Descendants Project organizers, Greenfield referenced the 2006 map for purchase of the land in 2021 and an additional land purchase as recently as January 2022. The property description included in the Act of Sale specifically relies on the conveyance records of the 2006 sale from Formosa to the Robert Brothers as “instrument number 270891,” which included the map showing the Wallace Tract to have R-1 zoning. The Act of Sale  from this year also specifically references the earlier 2006 map (751), showing the Wallace Tract as R-1.

In 2012, when the official zoning map was found to be missing, the council adopted a new map that reflected that the zoning for this property was heavy industrial and without buffer zones.

According to Senior Staff Attorney, Pam Spees from the Center for Constitutional Rights, “The map is significant because it was created at the request of Formosa and then signed off by the Parish President and the Planning and Zoning Commission Chairperson in 2006.These significant developments underscore that there is no valid zoning map that anyone can point to because all of the maps are conflicting.”

In a Zoom press conference, The Descendants Project presented a long list of circumstances including missing maps, pages torn from official bound documents, and pages missing from parish reports that pertain to the zoning of the Wallace tract. This is in addition to the conviction of then Parish President Lester Millet, Jr. for extortion and money laundering in connection with the zoning of the land as industrial to pave the way for Taiwanese company Formosa.

The Corps of Engineers issued another public notice to allow citizens to express their concerns over the proposed grain terminal’s impact on local wetlands.

According to Healthy Gulf, a nonprofit organization providing research, communications and coalition-building tools needed to reverse the long-pattern of over exploitation of the Gulf’s natural resources, “Wetlands provide a wind and flood buffer during storms. Wetlands prevent flooding by intercepting rainfall. Wetlands divert water and prevent inundation of the drainage system, in a way that a cleared right-of-way never does.”

The plans submitted along with the public notice show that the grain terminal’s runoff will drain directly into Bayou Quatre Pattes and Lac Des Allemands.

He stated, “Greenfield has been working hard to deliver a project that is great for the community, brings good-paying jobs and supports a cleaner future beyond the petrochemical industry. Sadly, some detractors continue to burden the courts with legal maneuvers that just don’t hold up to scrutiny. This latest addition to their filing is an admission their lawsuit wasn’t on sound legal footing. We look forward to a positive resolution.”

Williams noted that Greenfield’s buffer from residential areas is 450 feet, well beyond the required 300 feet. Greenfield will additionally be installing an eight-foot privacy fence and trees upon completion of the project.

Representatives from Greenfield Louisiana have stated that the grain terminal has been designed to meet and out-perform the most stringent New Source Performance Standards, adding that Greenfield facility will be one of the cleanest facilities in North America and will only bring safe and healthy jobs to the West Bank. The project is set to bring 100 permanent and 500 constructions jobs to the community.

According to Greenfield, air and water quality studies, wetlands assessments, archaeological investigations, cultural resource assessments, and threatened and endangered species reviews have been done to ensure this project is helping, not harming the community.

To learn more about the Greenfield development, visit Greenfieldla.com.