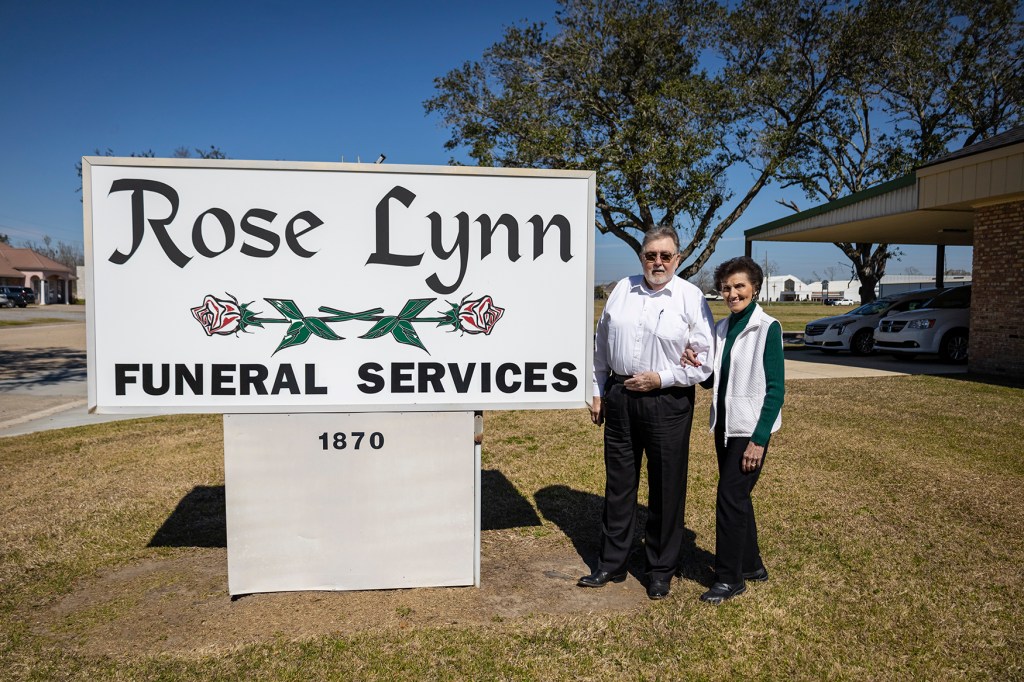 LUTCHER — Nineteen years have passed since J.B. Falgoust with First American Bank took a leap of faith on a railroad man and a housewife with dreams of opening a funeral home.

Since March 1, 2003, Rose Lynn Funeral Home has helped families in the River Parishes through the most difficult time of their lives with core values of compassion, sincerity and love.

This past year was one like no other for owners Mary Rose and Jerry Lynn Brown. While Rose Lynn Funeral Home started out as a joint venture with the owners of Thibodaux Landry Funeral Home in Lafourche Parish, the Browns purchased their partners’ position in the company in April 2021.

Rose Lynn Funeral Home closed its doors the day the hurricane hit. The next day, the staff immediately jumped into action, making necessary adjustments to accommodate families even while electricity was out and communications were down.

The Rose Lynn team communicated using the Zello app and hot spots on cell phones in the aftermath of the storm. The building was soon equipped with generators, window air conditioners and large fans. Jerry Brown made frequent trips between Lutcher and his farm in Mississippi to deliver gasoline, ice and other essentials.

Meanwhile, the Rose Lynn staff cleaned up the debris-covered parking lot. The husband of one of the team members went above and beyond to fill the generators with gasoline every afternoon.

“We cannot applaud our staff enough. They were extremely dedicated. Their above and beyond dedication and improvision allowed us to provide continued services despite the conditions we were faced with,” Jerry Brown said.

Rose Lynn Funeral Home was able to serve seven families before electricity was restored to the area. This past year, Rose Lynn Funeral Home served more families than ever before. As the business grows year by year, Jerry Lynn and Mary Rose continue forming lasting bonds with every family that walks through the door.

This past December marked the second year Rose Lynn Funeral Home held two remembrance services, a special opportunity where families of the deceased could come together and share stories of their loved ones with others experiencing the same grief. Food and refreshments were provided, and the funeral home was outfitted with formal tablecloths and flower centerpieces.

Each family member received a special Christmas ornament keepsake filled with petals from their loved one’s flower arrangement. Every ornament was personalized with something to represent the individual.

“We had two of the remembrance services, which is our effort to give back to the community and to the folks served and let them know that we don’t forget them. We still care,” Jerry Brown said.

While Rose Lynn Funeral Home was Mary Rose’s calling from the beginning, Jerry continued working on the railroad in the early years of the business. He started assisting with insurance matters around 2010, but it wasn’t until breaking his ankle in 2017 that he became fully involved with the funeral home.

Since then, the Browns have redesigned the Rose Lynn building to include two parlors, a chapel, and a space for embalmment and dressing supplies. Special equipment was purchased to outfit the funeral home with refrigeration, a new Cadillac hearse, an electric body lift and modern embalming equipment.

As the business serves more families each year, Rose Lynn Funeral Home is looking to grow its staff. Positions are available for a secretary and a dual-licensed mortician and funeral director.