2021: A year of blessings & success for DSC Dredge 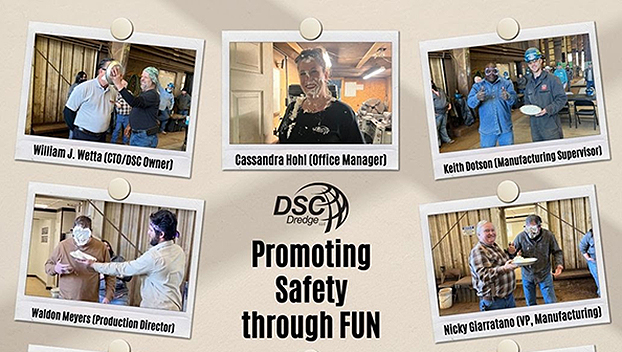 RESERVE – The past year has proven both a memorable and outstanding one for DSC with great accomplishments, new faces welcomed onboard, record-breaking contracts, international and domestic launches, and strong relationships fostered throughout the regions. Here is a look back to the key events of 2021 for DSC.

William J. Wetta, EVP and chief technology officer forged ahead conducting lectures and seminars on hydraulic dredging, hydraulic transport, trouble shooting and repair at the Texas A&M Dredging Engineering Short Course and various NSSGA events. Charlie Johnson, director of domestic dredge sales, hosted various small group Dreducation training sessions, ensuring this hands-on support for our customers remained a priority, while also joining DSC executives for speaking engagements with organizations such as NSSGA and WEDA. DSC’s president and chief executive officer, Bob Wetta presented at WEDA’s Gulf Coast Chapter on the Evolution of Dredging Technology.  This diligence transcended throughout the company to the support shown by its product support team members who remained dedicated to being onsite training and supporting its many clients.

According to DSC’s Project Controls Manager Ryan Menard, unlike in 2020 where the company trended on the delivery of its most sought-after Marlin Class dredge, 2021 proved very different with a diversified project schedule which included builds, deliveries and launches spanning DSC’s entire collection of Dredges. Deliveries were scattered not just across the United States but extended internationally to the Canadian and South Asian market.  Some of these clients included the State of Ohio (Barracuda), Deep Diggers in Bangladesh (Shark), Gerke Excavating (Marlin), Phillips & Jordan (Shark, Sharkuda, Booster, Barge and Dragflow dredges), Mike Hooks (Workboat), U.S. Army Corps of Engineers (USACE) (Wolverine), RIGID Constructors (18” Shark) and Silvi (Marlin), to name a few.

Over the next two years, DSC is expected to deliver over eight dredges and component packages thus far which includes two Marlin Class dredges, two Moray’s, two Sharks; two Wolverines, a Barracuda, multiple retrofits, several workboats and carriage barges along with multiple varying size boosters.  Highlighting these deliveries will include the Muddy Water Dredging (MWD) custom 24” Marlin – the largest of its kind in the US to maintain US navigable waterways.

With the 2020 official release of the biggest technological advancement in the industry – DSC Vision – 2021 was packed with multiple installs and numerous future orders. The idea of a user-friendly bottom visualization system that allows dredge operators and managers to “stop dredging in the dark” raged through the industry. Notwithstanding the pandemic and travel restrictions, by the end of 2021 the team was still able to successfully install five units which included DSC’s Gerke Excavating Inc., located in Tomah, WI. According to Product Support Manager Stephen McMahon, the guys’ work ethics have been nothing short of amazing. He added, the DSC Vision technology was bringing a lot of interest from current and potential customers alike. Not even a month into 2022, they had already sold two and were getting ready to install two by the middle of February. He projects there will be over 10 installations this year alone. “With the increase of projects, the need for our team to grow has become inevitable,” added McMahon.

Another great partnership to note was the one signed in 2019 with Deep Diggers Limited based in Chattogram, Bangladesh.  Two 18” Shark Class dredges were successfully built and launched in 2021. According to one of the Deep Diggers Directors, Mr. Omar Sharif (Tuhin) they were pleased to partner with DSC Dredge. Charlie Sinunu, director of international dredge sales at DSC Dredge noted, “this project was only the beginning; there are currently talks of more in the pipeline.”

In the first quarter of 2021, DSC announced the release of two new designs to not only its most sought-after Marlin Class dredge but also its Moray Class dredge. One of which has already been delivered to its new home in Salem, New Jersey the first month of 2022.

After the southern part of Louisiana was devasted by Hurricane Ida, DSC quickly created the “Hurricane IDA Relief Fund” dedicating thousands of dollars to assist team members who needed immediate help.  While many are still recouping from the effects of it, it was at this moment that everyone stopped at nothing to show support and generosity to each other – it was also a reminder of the dedication of so many community members helping those in need.

In a weird way 2022 will all be about 2021’s preparations.  Apart from the many deliveries already scheduled and with the reopening of tradeshows, the aggregate and dredging industry can expect to see and hear from DSC’s team members at various upcoming shows and academic sessions.

With the safety of our attendees in mind, the last two years DSC has chosen to abstain from hosting its Annual Dreducation® class in New Orleans. But as the rest of the country continues to see a decline in cases, this sought after one-day training session is once again on the agenda for 2022. Date to be announced.

DSC’s Dreducation® Class is a basic dredge operators’ training class designed to educate both industry professionals and newcomers on the fundamentals of hydraulic dredging to help them become more productive and work efficiently. This class is designed to be specific to all hydraulic dredges, and not manufacturer- or brand-specific. It explains the basic functions of each dredge type, production, and maintenance goals and how to safely achieve these goals.

Dredges: The newly improved Marlin is currently under construction and scheduled for release soon.

As a company, co-owners Bob and William Wetta shared Walt Disney’s sentiment ‘no one person can take credit for the success of a motion picture. It’s strictly a team effort. From the time the story is written to the time the final release print comes off the printer, hundreds of people are involved – each one doing a job – each job contributing to the final product.’ It is the same for DSC and the many people involved in our success story.