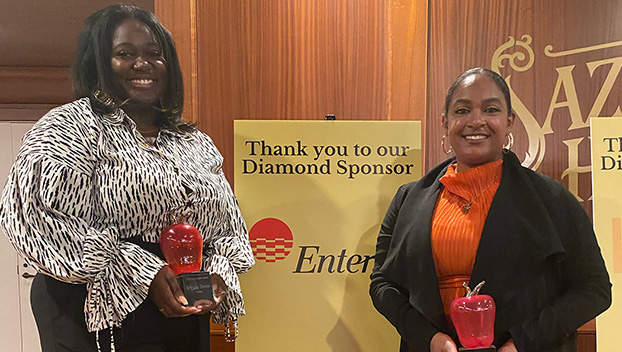 LAPLACE — An Entergy employee from the LaPlace area, Brittany Dennis, has recently been recognized by Louisiana Appleseed at the Good Apple Gala for her pro bono efforts to address the injustices against suspended drivers’ licenses.

Dennis is the first paralegal to receive the award in Louisiana Appleseed’s history. The other two other award recipients were Courtney Nicholson and Alicia Hall.

The three “Good Apples’” helped create the Louisiana: Suspended report, which examines the practice of suspending drivers’ licenses in Louisiana. According to the Louisiana Office of Motor Vehicles, there are more than 252,000 suspended drivers’ licenses on record, and nearly 80% of those suspensions were related to non-moving violations in 2019.

Their work included how Louisiana can match the license suspension framework of neighboring southern states and how legislators can draft amendments to the current drivers’ license suspension regime. More than a qualification to operate a vehicle, a driver’s license is a lifeline of access to work, school, healthcare and more.

“Volunteering with Louisiana Appleseed not only allowed me to invest my free time in helping others, it also allowed me to learn and be an advocate for those who have lost their driving privileges because they do not have the means to pay fines and fees,” said Dennis. “I am grateful for the recognition, but I am proud that I could be a part of something that could provide a more equitable future for those in need.”

Since 2012, Entergy’s legal pro bono program increased the commitment of company lawyers and paralegals to provide free legal assistance to some of the most vulnerable citizens living in Arkansas, Louisiana, Mississippi and Texas. In 2020, the legal department dedicated 3,622 hours to pro bono service, resulting in $932,000 of in-kind legal services to help more low-income customers.