‘Never give up on your dreams’: Garyville native thriving in Nursing School after 2 rejections 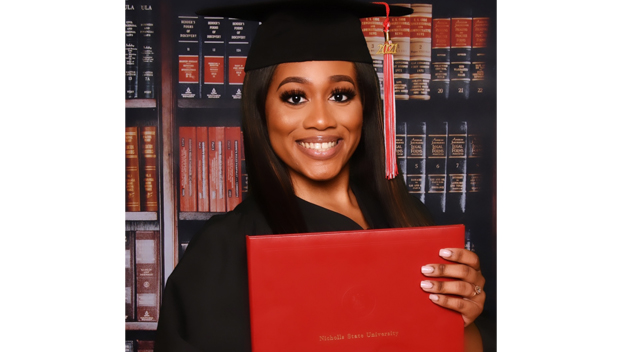 GARYVILLE — Le’Mon Rans Smith was discouraged when she didn’t get into nursing school on her first or second attempt. Instead of giving up, she vowed to change her life, trust God’s timing and continue chasing her dreams.

Smith is now thriving in her third semester of nursing school and is well on her way to building the life she’s always wanted.

A Garyville native, Smith grew up in St. John the Baptist Parish and attended East St. John High School. Longtime members of the community have commented that Smith has the same sweet and caring nature as her grandmother, the late Mona Lisa Burl Smith.

Mona Lisa Smith passed away in July 1997, two years before her granddaughter was born in July 1999. Yet, her memory has greatly influenced Le’Mon Smith’s path in life.

“My goal is to be an oncology board-certified nurse practitioner. I plan on working at MD Anderson under the Multiple Myeloma concentration because my grandmother had that type of cancer,” Smith said. “I never had a chance to meet her. That’s always had a soft spot in my heart, and I really want to work on patients that have that type of cancer. I want to be the healing hands for them and do a lot of research to find a cure for it.”

Since kidney failure is a common complication of multiple myeloma, Smith hopes to one day open her own dialysis clinic.

The journey to nursing school hasn’t always been easy, but it’s taught her that — with faith and perseverance — everything will work out the way it’s supposed to.

Smith started college at Fletcher Community College in Schriever but felt compelled to transfer to Nicholls State University after learning about the strong nursing program in Thibodaux. She transferred schools in Fall 2019, shortly before the COVID-19 pandemic turned the world upside down.

Smith’s first application to nursing school was turned down. The second time around, she made a 98% on her entrance exam but still didn’t get in.

“When I didn’t get into nursing school, I felt discouraged, but my grades weren’t where they should have been. I could have tried harder,” Smith said.

“The third time around, I prayed more. I had to trust God’s timing because there was a reason He didn’t want me to get in on the second try. I changed my whole life around. I had a goal that I set for myself, and I knew I had to achieve the goal,” Smith said.

She struggled to remain positive after her final exam, held on the same day as her aunt’s funeral, pulled her final grade in anatomy and physiology down to a ‘B’.

Smith prayed that she would find herself in a different atmosphere when she heard back from Nicholls. The first two times, she felt the crushing blow of disappointment after reading the rejection at work.

This time, the email came in on a Thursday, one day earlier than expected. Smith was relaxing at home and had just enjoyed her favorite meal when she finally got her much-awaited acceptance. In her excitement, all she could do was scream, cry, and thank God for the blessing.

The journey to nursing school has also allowed Smith to step out of her comfort zone and expand her horizons.

In May 2021, she obtained a degree in general studies with a concentration in health science while entering her first semester of nursing school. She has remained active in campus organizations even while working as an oncology nurse tech for Baton Rouge General Medical Center.

Smith has participated in Legacy Leaders and was nominated to be the vice president of SALUTE, an organization founded on the sisterhood of African American women. She was recently appointed as the College of Nursing senator for the Nicholls Student Government Association.

“Never give up on your dreams,” Smith said. “I always knew I was going to be a nurse, and I’m going to make sure that I finish this program and become the nurse that I want to be. It’s not going to be easy, but I’m halfway there.”